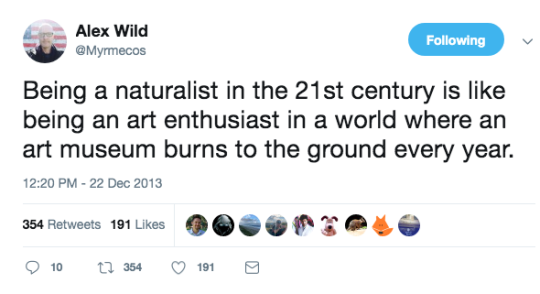 Alex Wild @Myrmecos
“Being a naturalist in the 21st century is like being an art enthusiast in a world where an art museum burns to the ground every year.”
-12:20 PM – 22 Dec 2013

It’s an appropriately depressing way to phrase the problem. To that I would only say it’s more accurate if every drawing would take hundreds of thousands of years to complete and every painting millions. I see the value that investment of time represents in every species and it creeps me the hell out when I see them being smoked like cigarettes, by the dozens, the hundreds. Entire populations of organisms lost forever, many every single year.

Some people also see that value and the destruction gives them an erection. Some people would pay big money to personally kill the last rhinoceros. The same kind of people who destroy art, who blow up thousand year old statues. What can I even say about people that evil? Nothing. Whatever I say they’d enjoy it, wallow naked in it. I’m done.

Chelsea Manning is Free… For Now » « Work at CNN? Quit Your Job Now