So Marvel just finished airing the safe-to-say series finale of Inhumans, their most panned production to date, and it got me feeling like, hey, somebody oughtta stick up for anyone that is getting crapped on that hard. So. Marvel’s Inhumans.

In a moment of perfect timing during the last episode, the words “Created by Scott Buck” appeared on the screen just as the villain of the show was saying, “You realize this is all your fault.” But was it? Must we assign blame? Can we accept this moment, this thing as it is, and move on without recriminations? I dunno. Just sayin’.

Inhumanoids is the story of the inhumans, who are a race of superheroes resulting from the work of Ancient AliensTM. They live on the moon. A lot of them have short foreheads, which makes me think the casting director has a short forehead, and just thought, hey, these people look good and normal. And they do, I mean, my head looks like the comic version of Karnak, so maybe it’s a matter of perspective. Even so, it gets a song in my head. 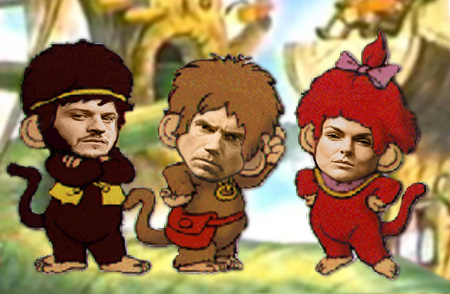 The title of this post isn’t a lie. But I have to mention the bad before I can get to the promised praise…

Inhumans have a coming of age ritual in which they subject their teens to toxic waste that can turn them into world-wrecking doombots, give them a bad wig, or just make them into boring ol’ humans. Despite the fact some inhumans come out of the terrigen mist in a lifetime of pain and misery, they still do that shit. Because tradition!

So the king’s brother Maximus – the most monkey-headed small fry in the central cast – is one of the lucky ones that was only turned into a human. But hold on. There’s a caste system. And even though he’s a royal, he gets sneered at by his fam.

So he goes ragey and stages a coup. This is the central plot of the show. A revolutionary wants to abolish a shitty caste system, but it’s totes for the wrong reasons, and he ends up blowing up the moon! Everyone gets sad and has to live in a football field like Hurricane Katrina. But at night, so the darkness can hide the cheapness of the set.

Along the way we meet the inhuman royal family, and at every turn see them degraded and hobbled – literally – by budget constraints. Queen Medusa’s wig knows kung fu, but it gets snatched by Maximus after one little fight. The royal pet Lockjaw the teleporting dog gets run over by a Beach Boy on an ATV and has to convalesce in a barn, just out of camera view. Karnak the super-genius gets brain damaged because writing a smart character is more difficult than they could budget for. King Black Bolt the mute leader can’t express himself with physical actions or a range of expressions because the show is ramming him through the one-note plot as fast as possible. Revolutionary Maximus grates on us by getting too much screen time, as the most famous actor they could fucking afford.

The lack of consideration about Black Bolt’s condition is kind of shocking, the more you think about it. Because you very quickly realize it would look nothing like it did in the show. One: If his voice could accidentally kill, he’d have his mouth permanently closed somehow. Willingly, I’m sure. Why wasn’t his jaw wired shut? Two: He’d communicate with a robo-voice. We have this technology now. With futuristic moon tech, there’s no reason it couldn’t be done at a rapid speed, with nerve-operated word selection, predictive text narrowing the options, and so on.

Then there’s the costume design. Everyone hated this, but few could articulate what the problem was. I have a degree in fine art. Allow me to step up to the plate.

In superhero movies, we’ve come to accept certain conventions. Costumes have design elements which – while more subtle than Schumacher’s bat-nips, are suggestive of aspects of muscular anatomy. The geometric design of Captain America’s belly armor rather abstractly evoking abdominal muscles, the less subtle muscle shapes in the weave of grimdark Superman’s body suit. Not just muscles. The lady superhero outfits may not be the boob socks of the comic page, but they make sure you know they have breasts. This is part of the design principle you see in tailored clothing at fashion shows: Don’t exaggerate nature necessarily, but make something of it. Work with the lines of the body.

The outfits they wore, from the maligned early promotional shoot on, were just crappy. They didn’t suggest natural form, or just had the most cursory nods to it. Maybe they didn’t have time to tailor? The clothes had too much blank space – open stretches of fabric with no seams, no lines, no shape to lend interest, or to evoke the superheroes beneath the fabric. It was a lack of inspiration that suggested the producers were playing it safe and almost landed in Amish country.

There was a character that came off as a cheap imitation of Felicity from The Arrow. The Inhumans character was a more realistic nerdlinger than Felicity, because her hair and make-up weren’t laser-crisp off the plastic press like everyone on The CW. But because she was doing the blonde nerd thing, it evoked Felicity in the mind, and our Inhumans nerd looked cheap in comparison. Like they’d saved money on wardrobe by having the actress wear her laundry day get-up.

In all seriousness, I like artists, I like actors. I like to see them working, even when the chips are down, all the way down. Actors are professional charisma-havers and play-pretenders. They gave it a go, with a script that was severely, severely underbaked. My least favorite performance in the central cast was from Black Bolt, but then I found out that actor Anson Mount made up his own moon sign language for the part, put real work into making this good, and it makes me want to cut him all of the slack. All of it.

Because this show involves space stuff and is in the Marvel universe (oh how I love that a failure this massive is officially in the same canon as all our faves*), it will inevitably make people think about Guardians of the Galaxy. That makes it look a trillion times worse, of course. They are nothing alike, just about as far apart as possible in every way. Which makes sense if you look at some of the most fundamental ingredients: Guardians had a truckload of money and a director given great leeway by the studio, Inhumans had a dude on a leash spending table scraps.

But Inhumans didn’t need a Guardians budget. If you watch Guardians 2, you’ll notice that every shot, every frame, every ounce of the production was designed for maximum gloss. They probably color corrected individual pixels that looked at ’em funny. It was excessive as hell. The writing was fine, but the story by design wasn’t as fun as the first, and that gave me lots of time to notice the 21st century Cecil B. DeMille of it all.

Inhumans could have used the same actors and resources it had, and with more time on the script, more freedom for costume design, and more time to have fun with itself, been super campy goodness. I’m talking Buck Rogers or Flash Gordon type fun (and hopefully less racist against the Chinese than the latter).

Where’s the gold lamé? The skin? These are superheroes. We oughtta see their muscles. Get more naked y’all. Black Bolt needs a tight butt body suit. We’d have forgiven all the cheapness if the show was just more fun. I wanted to see more fakey Medusa hair knocking fools out. And everybody wanted more Lockjaw. Hell, from the trailers I was expecting Black Bolt to spend more time with the dog, which would have been perfect for characterizing a mute guy.

And I loved Serinda Swan’s kill-crazy aspect early in the show. She should be in something like that CW Dynasty reboot, or playing a villain on one of those faerie tale shows. She got her wig snatched in this, but she should be the one snatching wigs.

I’ll reiterate the point about the budget: It’s the obvious thing to criticize. But one of the cheapest things in a budget is writing. All you need is the willingness to make time for it. If this show had a real script, it could have been way better. Any good work on the part of the actors was rendered silly by the horrible slapdash writing they had to communicate. “If I can’t have Moon City, no one can!” Ka-BOOOooom!

In short, I don’t blame individuals or even their shared effort. It’s The Man, as usual. The show was an embarrassment, bad enough to be unintentionally funny most of the time, but with an anticlimax that just left the whole thing feeling pointless and doomed. A waste of time and effort. Anson, lo siento amigo. I’d love to see most of the actors again, in better stuff. Especially Serinda in kill ’em all mode. Until we meet again…

*I should elaborate on this point: I’m not being sarcastic. I’m genuinely, deeply amused by the idea this cheap-ass pathetic space soap officially, totally officially, is what’s happening on the moon above The Avengers, Captain America, Daredevil, Spider-Man, and Jessica Jones. Like, if The Punisher went to Hawai’i and saw Black Bolt and Lockjaw violating traffic laws, he’d have put seventeen in their domes. Just… amazing.