Content Warning: Statutory Rape, Homophobia, Biphobia, Eating Disorders,
Fatphobia, let me know if u think I should mention anything else…

Social justice score: 1 out of 5

So Archie Comics got hella weird in the Nü Millennium, with attempts at maintaining relevance by reaching different audiences. One of those tacks was to make a series of serious adult-ish comics with edgy elements written by Mark Waid. Now adult-ish edgy Archie is on The CW and to kill a minute I’m watching the first episode. Thoughts as they come…

1) They open with a mystery about a wet dead teen in a forested town with secrets, so Twin Peaks is being explicitly homaged. We’ll see how that goes. The editing, pace, and pretty much everything is too modern TV to evoke David Lynch, but whatever. Total ripoffs are embarrassing.

2) They say Cole Sprouse – who is I guess a disney expat / internet celeb – is pushing to have his character be asexual, as he is in current comic canon (which itself is very consistent with the character over the years spurning love for cheeseburgers). So coo, but then, I’ve heard rumor Sprouse is a crappy dude, so ehhhhh. As I mentioned he’s playing Jughead here, and in a move that surprised me, he’s acting as the Doogie Howseresque laptop-typing narrator of the show.

3) Betty’s gay best friend type espied Archie’s new hot bod from the house across the way and was like, hubba hubba. Gay lust is edgy. But at the same time, he described Arch as “swell,” not “swole.” So they’re mixing the edge with the faux-retro cheese. Another Twin Peaks point. 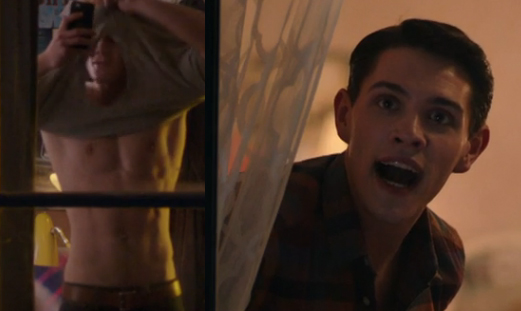 4) LUKE PERRY AS ARCHIE’S DAD!?! I love it. He has aged into Bryan Cranston, but without current success adding “importance” to the performance.

5) Hey Reggie is Asian. And a beefy all-American jock jerkbro, so getting away from the usual stereotypes in at least one department. Cool.

6) Oh so gay best friend is the gay character from Archie Comics circa now, named Kevin Keller. And they hung a lampshade on the trope. No escaping stereotypes for this lone homosexual.

7) The Pussycats are all black girls. Hello there. Kinda sassy, not sure if that’s canon or stereotypes. Either way, shutting down the intruding white boy, so good job. Sugar Sugar sucks anyhow. (I think the actor playing Arch is a wee bit Maori but not sure, nonetheless he’s white in this story.)

8) Holy shit. Sexy Miss Grundy?!?!? This might be the case in the comics too, I never read them. Only caught a bit of press. Well, it’s statutory rape time, whatever the case. Hooray?

10) Luke Perry again, boy, he seems as smoked out as he did in Buffy the Vampire Slayer. So chill. And yet, we’re probably supposed to buy him pooping on Archie’s dream of playing shitty pop songs, instead of being more like Tommy Chong letting Rae Dawn be in all the movies. 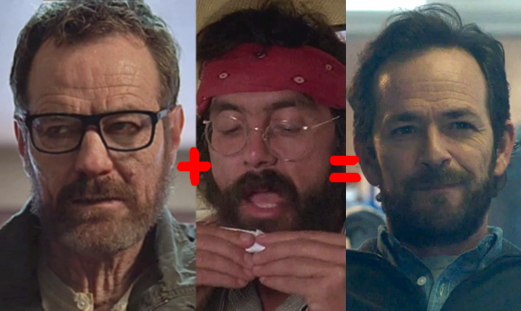 11) Oh god no, it’s the actual songs they’re doing for Archie. Coming soon to a Starbucks near you. x_X bleeeeah

12) GBF: “Is cheerleading still a thing?” Cheerleader: “Is being the gay best friend still a thing?” Oh, sick burn. Homophobia is totally equivalent to mocking school clubs. Plus the lampshading wasn’t even working the moment the character appeared, now it’s totally shot to hell. You don’t get to call your own writing sucky preemptively to hope the audience won’t criticize it.

13) Was the cheerleader implying Betty’s meal of a muffin, an apple, some vague leaf, and water might make her too fat to cheerlead? Good times. Even from a character we’re clearly not supposed to like, I don’t accept this. For now tho, I feel like I can press on. For the sake of this review. I did, after all, finish the second season of The Strain.

Yes. She was saying she was too fat. And how to help her feel better? To say, oh no you aren’t fat. Because being fat is inherently bad, rather than something that only sucks because of diet industry moolah-fueled fatphobia saturating our culture. That’s what I want to think about during my entertainments.

14) Veronica calls Betty “queen bae of the strive hive.” I have to admit, I never watched the recent teen shows like Glee and what-have-you, but this seems a bit much. First hint of bisexualities on show tho? 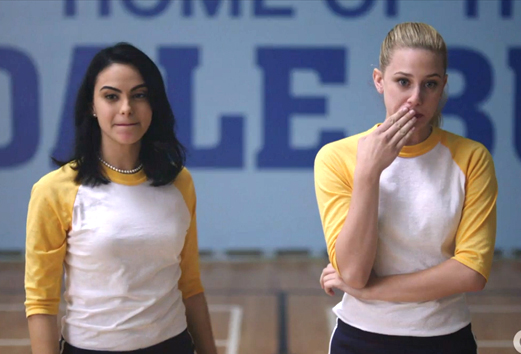 something foolish and offensive happened

17) This Mean Girls stuff isn’t really for me, so I don’t feel qualified to comment. Though it seems like they’re kinda rushing the development here, and will pay for it with filler episodes later in the season.

18) This polyamory tease will not last.

19) After school specialing across the universe. The more u know, the more u grow.

20) In this scene with Arch & Dad, did Arch just imply losing his virginity to statutory rapist made him a manly musical brooder?

21) Luke Perry defied expectations to be the understanding dad what tells u to follow ur star but with the great power-great responsibility Uncle Ben undercurrent. He will be the show’s conscience, won’t he?

22) “This post-James Franco world”… Veronica is kinda fun. I dunno.

23) Salacious gay biz must be mentioned but not seen. It’s only 2017. We’re not ready yet. Maybe when the world is on fire and we get a Movida Madrileña as the Trump dynasty begins to decay.

24) Spin the bottle to “ride the ginger stallion.” Sounds legit. Carry on.

25) Arch & Veronica in the closet. As they stand so close, things heatin’ up, she ends up looking cross-eyed and I wonder, does that happen to everyone when they try to make eye contact at close range?

26) Oh god we looped back to Sprousehead at the all nite diner. Narration again. Lay it on me, guy… Nope. Nothing of interest happened.

27) This big Archie Betty sad scene is what it is. She’s doing a good enough job of acting, he’s losing points because he has to be too manly to express big feels. “Yr 2 good 4 me” that’s some tired biz. Don’t hate yourself because you’re a rape victim, Archie. That’s my generous interpretation of his act here. I find Betty has a kinda cute nerd voice, didn’t really notice it before. Maybe it gets more charming with snotty tear time.

29) Jug narration continues beyond his scene. We did get the excuse for it – he’s novelizing the town’s dramas. But how does he know everything? French fry-based divination? Potatomancy? 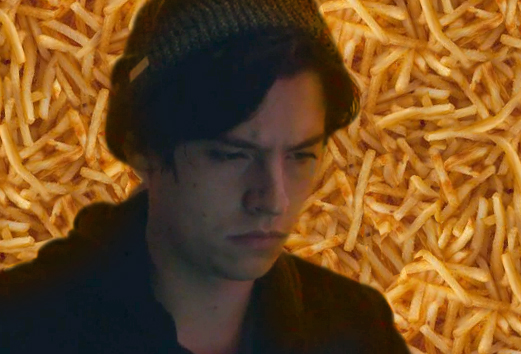 30) A little hint of gay cocks that must forever be blocked, and a body is found to bring the show to a close. Mysteries! People standing around! Look at each other meaningfully. You know you wanna watch a season of this…

In the end, I only watched it because Archie Comics are a weird-ass American institution. Their mere continued existence at the supermarket checkout stand amuses me. As for the show? Arch looks too damn square-jawed and is too manly to show believable emotions. Stephen Amell on The Arrow is similarly the least expressive character on his show and still more believable than Arch.

The Archie/Veronica/Betty drama so far doesn’t seem too mean-spirited or egregiously sexist, might be the best thing on the show. They center the shared coming of age stories theme and it works fine, just not my thing. Anyone who saw the trailer and imagined you might see ladies lovin’ ladies should give it a hard pass. Even if they do tease with that later in the season, there’s no way they’ll stay with it, given the history of the characters.

As for the Twin Peaks homage, if you want the candy-coated parody of the visual style plus only the soap opera elements of the plot, you’re in luck. Otherwise, nuh. And for the show in its own right? I saw nothing to keep me around. The gay stuff is a side joke / tease job that will yield absolutely nothing of importance in the long run. I’m not that into soap operas with no fantasy, scifi, action, or horror element. I’ve never watched The OC, Party of Five, Beverly Hills 90210, etc. If any of you have more experience with that genre and saw this show, what did you think of it?