i log into the tumblr
i oppress the cis
—officialcisally

It’s International Down With Cis Day, suggested by tumblr user queernightmare to commemorate the birth of a meme.  On this day last year, a creepy transphobe with the handle “foreverhonest” posted a patently false story of being assaulted by trans people.  Behold the majesty:

Here’s a thing that happened to one of my friends. I was there.

Basically, we were walking down the sidewalk, talking about something meaningless. I think it had to do with a movie. Then this bus screeches up, stops next to us, and a bunch of people with “Down with Cis” shirts climbed out and started beating him up. I was punched and kicked a bit too, but I managed to avoid brutalization by going for their faces. After figuring out what’s happening, I started attacking them back, getting them off of him. He was quite injured but I called 911 and he made a full recovery at the hospital. I was fine, with only a cut on my arm that they patched up.

It had to be a joke, right?  If so, it went over the heads of people looking for reasons to hate trans folks.  Tumblr user chandra-nalaar compiled “some highlights from all the people who believed the ‘down with cis’ post.”  Follow that link at your own peril.  Well, clearly FH didn’t expect anyone to believe that, right?  Their post history (not linking to it) shows they are in fact an open transphobe, so what did they mean to achieve if it was a joke?  The clear aim is to spread transphobia.  Perhaps the laughably obvious lies from someone going by “foreverhonest” were meant to establish plausible deniability.

It doesn’t matter because it quickly became a meme.  Before that cisgender man, no one had ever uttered the grammatically bizarre phrase “Down With Cis.”  Now, it has been reclaimed by trans people and their allies, adding to the legend.  Some write improbable stories of their own patterned after his, others use the phrase and variations as a cheeky rallying cry of the oppressed or just to indulge in cathartic silliness. (warning for flashing animated gif on last link) 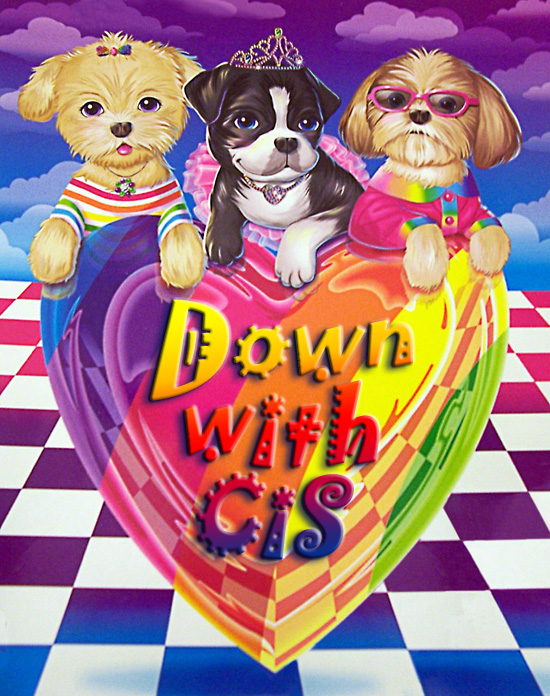 Why all the hubbub, bub?  You may find yourself wondering, might not even be familiar with the terms in play.  Let me see if I can break it down to the basics:

And so, without giving any thanks to the creep that unintentionally started all of this, let us celebrate International Down With Cis Day.  If you’re transgender, nonbinary, genderfluid, whatever, grab a t-shirt and get on the bus.  If you’re cisgender and leave a rainbow cake on your stoop at midnight while singing hosannas to Laverne Cox, the bus will pass you by.  The rest of you?  Down with cis!

Islam is the Same Everywhere. Or Not. » « Guest Post: I am the Stranger