Another item to include is Connie St Louis’s famous tweet, which broke the story: 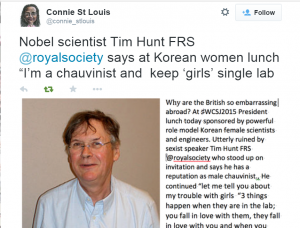 Why are the British so embarrassing abroad? At #WCSJ2015 President lunch today sponsored by powerful role model Korean female scientists and engineers. Utterly ruined by sexist speaker Tim Hunt FRS @royalsociety who stood up on invitation and says he has a reputation as male chauvinist.

END_OF_DOCUMENT_TOKEN_TO_BE_REPLACED

Because of all this nonsense talked by people like Dawkins and Brendan O’Neill and Dawkins and Brian Cox and Dawkins, I’m looking into the Tim Hunt question more than I did when it started. (That week was quite full of other things, what with going to a conference and a few other odds and ends.)

So now I’ve read David Colquhoun’s take, or rather takes.

It’s now 46 years since I and Brian Woledge managed to get UCL’s senior common room, the Housman room, opened to women. That was 1969, and since then, I don’t think that I’ve heard any public statement that was so openly misogynist as Tim Hunt’s now notorious speech in Korea.

On the Today Programme, Hunt said “I just wanted to be honest”, so there’s no doubt that those are his views. He confirmed that the account that was first tweeted by Connie St Louis was accurate

Inevitably, there was a backlash from libertarians and conservatives. That was fuelled by a piece in today’s Observer, in which Hunt seems to regard himself as being victimised. My comment on the Observer piece sums up my views. END_OF_DOCUMENT_TOKEN_TO_BE_REPLACED

Sean Carroll ‏@seanmcarroll Jun 9 Always happy to be reminded that there’s no sexism in science, just that those girls keep crying in the lab. Sean Carroll added,

This is an interesting twist: the Observer ran a piece on Tim Hunt yesterday in which the reporter, Robin McKie, said disgusting things but Tim Hunt said some good things. Tim Hunt arguably took a fairer view of the reaction to his remarks than did the science editor for the Observer.

The beleaguered UK scientist Sir Tim Hunt on Saturday thanked the hundreds of female scientists who have written to support him in the wake of the furore triggered by his controversial remarks about women in science.

Hunt, who won the Nobel prize in 2001 for his work on cell biology, became the focus of furious online attacks earlier this month over comments about women in science being disruptive. He had to resign from several academic posts, including an honorary position at University College London (UCL).

However, support for Hunt has since mushroomed, with fellow Nobel prize winners, senior academics and leading scientists and politicians – including Brian Cox, Richard Dawkins and Boris Johnson – lining up to denounce the treatment of the 72-year-old biologist.

END_OF_DOCUMENT_TOKEN_TO_BE_REPLACED

The great man is still on the job. 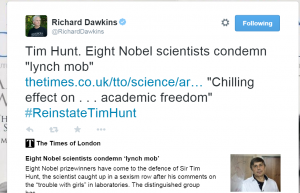 There is no lynch mob, not even in scare quotes. Tim Hunt hasn’t been harmed. He hasn’t been beaten or stabbed or dragged behind a truck or thrown in a river or hanged from a tree. He hasn’t lost a job. He lost honorary positions, and respect. END_OF_DOCUMENT_TOKEN_TO_BE_REPLACED

UCL can confirm that Sir Tim Hunt FRS has today resigned from his position as Honorary Professor with the UCL Faculty of Life Sciences, following comments he made about women in science at the World Conference of Science Journalists on 9 June.

UCL was the first university in England to admit women students on equal terms to men, and the university believes that this outcome is compatible with our commitment to gender equality.

See that? That’s important. The people squawking about witch hunts and packs of baying women with pitchforks seem to think that UCL pushed Tim Hunt out to punish him for expressing his contempt for “girls.” That’s fatuous. UCL didn’t want to keep an honorary professor who had expressed his contempt for “girls” to a group of women scientists at a professional conference. Of course it didn’t! If UCL had kept him on then it would have seemed to endorse, or at least refuse to reject, his publicly professionally expressed contempt for “girls” in the lab. That would be an abysmal outcome. END_OF_DOCUMENT_TOKEN_TO_BE_REPLACED

More from the “can’t somebody make those women shut up?” campaign, via the ever-reactionary Telegraph.

Eight Nobel prizewinners have come to the defence of Sir Tim Hunt, the scientist at the centre of a sexism row following his comments on the “trouble with girls” in laboratories.

They warned of a chilling effect on academics’ freedom to speak their minds after Sir Tim was forced to resign his honorary post at University College London amid pressure from social media users.

UCL has said that social media users had nothing to do with it. The Telegraph doesn’t exactly say they did – “amid” is a very handy word for that purpose – but it certainly means the reader to get that impression.

And then, this “freedom to speak their minds” shit. Nobody needs academics to feel free to say things like “we don’t want any Pakis in our labs” or “black people can’t do science anyway” or “girls are a nuisance in our labs.” END_OF_DOCUMENT_TOKEN_TO_BE_REPLACED

Janet Stemwedel takes a different view of the reactions to Tim Hunt from that of Professor Richard Dawkins FRS. Her view is pretty much the opposite of his.

The vigorous reactions to remarks by biochemist Tim Hunt about women in science on social media and elsewhere are being cast as “internet shaming.” That’s a mistake. The reactions are, in fact, exactly part of the way scientists engage with each other to build knowledge.

Tim Hunt, winner (with Paul Nurse and Leland H. Hartwell) of the 2001 Nobel Prize in Physiology or Medicine, made news last week for remarks he made to members of the Korea Federation of Women’s Science and Technology Associations at a luncheon at the 2015 World Conference of Science Journalists…

…Asked to clarify his position, Hunt asserted that he “meant the remarks to be humorous” but affirmed that he “just meant to be honest.” In the wake of the public criticism, Hunt resigned an honorary post (one with no salary, teaching responsibilities, or lab space) at University College London (UCL), though there are conflicting accounts of whether this resignation was voluntary or not. Now, the vocal criticism of Hunt’s remarks is being characterized using hyperbolic terms like “lynchmob,” “witch-hunt,” and “disemboweling.”

END_OF_DOCUMENT_TOKEN_TO_BE_REPLACED

The scientist and broadcaster Prof Brian Cox has said it was wrong the way a Nobel laureate scientist was “hounded out” of his university post over controversial comments he made about women working in laboratories.

Cox said the remarks by Sir Tim Hunt had been “very ill-advised” but that the response – which saw him give up positions at University College London (UCL) and the Royal Society – had been disproportionate.

UCL and the Royal Society want to attract women to science. They don’t want to repel women from science. They don’t want to alienate women already in science. So why is it disproportionate for them to dump a Famous Pale Male Scientist who goes to a conference in a foreign country and gives a talk in which he talks about women as if they were pets or small children? END_OF_DOCUMENT_TOKEN_TO_BE_REPLACED

Rhiannon Lucy Cosslett, who started the #distractinglysexy hashtag, explains that she didn’t get Tim Hunt kicked out of anything and neither did the hashtag.

Despite claims that the response to Hunt’s comments constituted an online “march of the feminist bullies”, no one who was part of this humorous attempt to highlight the varied and complex work of female scientists called for Hunt’s resignation or hounded him online, but that was the way it was framed.

There were undoubtedly unpleasant people on social media crowing about the man’s downfall but as far as I could see the discussion was largely jocular and – owing to the fact that many of the female scientists were posting photos under their own names – mostly professional.

The Hunt controversy continues to make headlines, with Boris Johnson and Brian Cox wading in this week as the backlash to the backlash. I even heard it said on Radio 4 this morning that “Tim Hunt was hounded from his job by a Twitterstorm”. This is patently not the case.