So now there’s a lot of bullshit and ass-covering about the cancellation of Kate Smurthwaite’s comedy show at Goldsmiths. So Kate has presented the documentation.

The media have written a lot about my show at Goldsmith College being cancelled tonight and of course social media is now abuzz with people calling me a liar and claiming I’ve made the whole thing up. So here’s my version. With screenshots to prove it. My apologies for releasing shots of what was obviously intended to be a private conversation, I wanted very much to avoid this but I’m not going to put up with being called a liar repeatedly. I have blurred out identifying details of the representative from Goldsmiths Comedy Society because I know from personal experience how the internet can over-react otherwise.

I was booked to do a show at Goldsmiths College, in south London. I’ve performed there many times before. The show was a joint event for the Comedy Society and the Feminist Society – members of which could come for free – and we then agreed that they would put up a ticket page for anyone else – such as local residents who fancied coming. As a way to cover costs or raise a few extra quid.

The day before the show (Sunday) I was getting a lot of hassle on Twitter because I had dared to suggest that cutting the opening hours of Spearmint Rhino strip club was a good thing.

So she thought it only right to inform the organisers that there might be some protesty disruption at the show.

But they already knew… 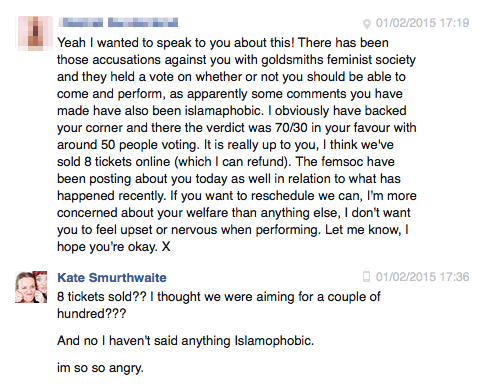 …needless to say I was more bothered by the apparent low ticket sales – I hadn’t realised (this would be clarified later) that this referred to tickets bought online, not to members of the Comedy Society and Feminist Society who would be just showing up on the night as they didn’t have to pay. So I queried this… 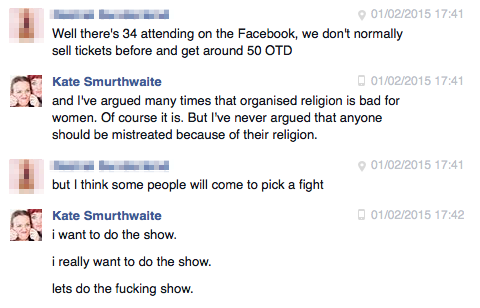 She wanted to do the show. People are saying she was trying to get out of doing the show. Nope.

Also, it wasn’t about the ticket sales.

Also note that after the media got hold of the story Goldsmiths Comedy Society responded suggesting the show had been cut due to poor sales. A few points on that:

1. The show was never set up for tickets to be sold – it was a free event for students from the relevant societies. The tickets sold were extras on top of the expected crowd.
2. They were still expecting 50 people when hey pulled the event.
3. The show has been very popular elsewhere. In Edinburgh we had to cut the show slightly short to allow extra time to get the crowds in and out on weekends. It had all 4 and 5 star reviews. For example: http://one4review.co.uk/2014/08/news-kate-leftie-cock-womble-5/
4. If you’re going to pull a show over sales, you could save a lot of effort by just doing that rather than trying to call me a bad person!
5. Wow – isn’t it petty and mean to refuse to accept that you screwed up and try instead to damage my professional reputation by undermining me with misleading data like that?

Yes, it fucking is.

I’ve seen one of her shows. I’m that lucky. I sat two or three yards from her when she did a show at a Dublin pub in July 2013. It was brilliant. Ab-muscle hurtingly funny and brilliant. Ask PZ, ask Sili – they were there.

Then the organizer says some nonsense about supporting the sex industry. Kate says she supports the women in the industry, but “can hardly perform at a pro-pimp event.”

So then bam, it was canceled, just like that, for no real reason. 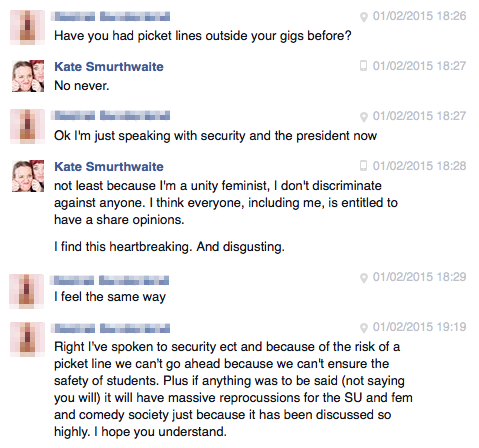 She doesn’t, and neither do I.

And then, somehow, it became about Kate’s offenses against the burqa. 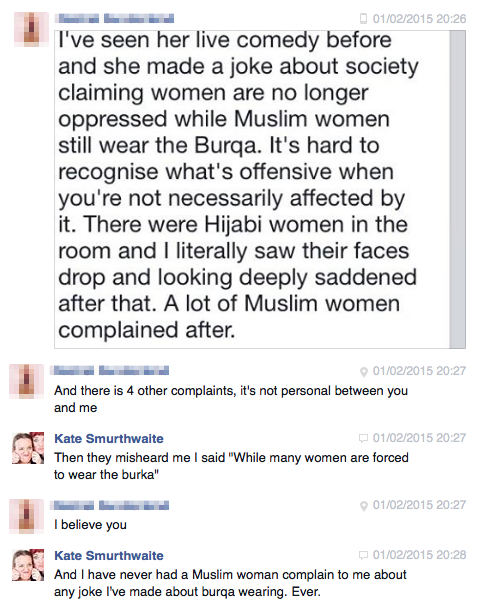 I’ve already seen some of my feminist Muslim friends commenting on Kate’s Facebook post about this, disgusted on her behalf. Tehmina Kazi is one. 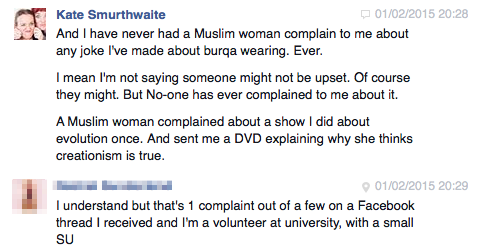 …I wasn’t shown the other complaints – I have asked for them.  I do feel bad that one individual has beens stuck in the middle of clearly a lot of conflicting angry voices (including mine). But on the other hand (philosophy mode now, strap in!) that’s the responsibility that free speech gives us. People can say things, others can complain, someone needs to assess those complaints and see if they’re worth acting on. Obviously I think I should have been allowed to perform. Especially as my show – which is not in any way about the sex industry or the burqa – is about free speech. Actually there is no better time to heckle than halfway through a show about free speech!

And yes – we probably will put it on somewhere else in London soon. It will be part of the Leicester Comedy Festival and hopefully the Brighton Fringe. I won’t post links or I’ll be accused of shamelessly using the incident to promote my work. But anyone who had a ticket for Goldsmiths – yes all eight of you!! – can drop me a line and be guest-listed and served free drinks by me personally at an upcoming performance.

I’ve quoted very extensively because Kate wants this to get out there, but read the whole thing to get every detail. And don’t be deceived by the bullshitters.