Last week the Beeb took the temperature after the lashing of Raif.

Two Arabic hashtags that translate to “Raif Badawi’s public lashing” and “ lashing Raif Badawi” trended in Saudi Arabia with more than 250,000 tweets after news of carrying out the first round of lashes on Badawi was announced.

Unsurprisingly, there were some hooray tweets.

“He established a network to spread apostasy and to offend religion and the prophet’s verses and some people cry for him, I say he deserves more than this,” one Saudi twitter user commented.

But there were many who expressed their anger and dismay at the sentence, especially at a time when Saudi Arabia is battling with extreme fundamentalism.

“It’s religious extremism that deserves punishment because it’s what brought us the Islamic State and not liberalism which fights extremism” commented another Saudi on Twitter.

It’s odd to talk about Saudi Arabia “battling with extreme fundamentalism” when it’s so extremely fundamentalist itself. Remember: it refused to sign the UDHR when Egypt and Pakistan did. It has never signed it. It uses its oil money to fund Wahhabi evangelism around the world. It’s not an outpost of liberalism and human rights.

And while #JeSuisCharlie trended worldwide after the Charlie Hebdo attack, some of those who support Badawi started #JeSuisRaif to raise awareness about his case. 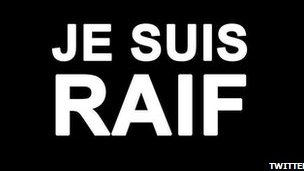 It’s always good to see the BBC giving a shout-out to Maryam. They don’t do it often enough. Too much Sacranie, not enough Namazie.

Elham Manea, an associate professor of politics at Zurich University, believes that there could be a possible number of reasons why the punishment was carried out.

“It could be because Saudi Arabia wants to show that it will not submit to international pressure,” said Manea, who has been campaigning for Badawi’s release. “It could also be about an internal struggle and rivalry inside the ruling family.”

“But I’d say the most likely possibility is that the ruling family needs the support of the religious establishment against the tides of Arab Spring and dissident voices inside the kingdom, so this is what they are offering in exchange for their support,” said Manea.

The apartheid regime in South Africa also wanted to show that it will not submit to international pressure for years and years…and then changes came.