So, thanks to artymorty, here is Pro-Life Waco and its campaign against Planned Parenthood complete with STOP Planned Promiscuity sign.

They had a campaign against a sex education program by Planned Parenthood, with its own website that looks a lot like the original website, complete with recumbent white lady pasted to baby. 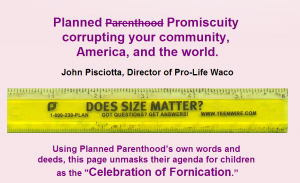 corrupting your community, America, and the world.

Using Planned Parenthood’s own words and deeds, this page unmasks their agenda for children as the “Celebration of Fornication.”

Pisciotta presents his deep thinking on the subject.

What follows is almost unbelievable material that unmasks Planned Parenthood schemes to capture our children and grandchildren. When I think I have understood how bad this organization is, they always surprise me and reveal they are even worse. In deceptive statements, Planned Parenthood may claim to promote abstinence. In reality thiswolf in sheep skin promotes promiscuity and its own profit and power.

I have come to believe that promotion of promiscuity is more central to the “DNA” of Planned Parenthood than abortion. Going back to its founder, Margaret Sanger, Planned Parenthood has always promoted free sex and attempted to melt away the roles of parents and religion. Abortion can be seen as a pernicious outgrowth of the corrupted belief that promiscuity can be lived without difficult consequences. Moreover, to the extent that Christians can turn themselves and others from promiscuity to chastity, abortion fades away. As self-giving love, commitment, and marriage strengthen, the holocaust recedes.

So now we know where those signs came from.

Another bunch left, then another » « Planned what?