This is what I mean. kellym linked to a bit of Twitter harassment of Pamela Gay, so I took a look at the guy doing the harassing, and this is that guy. 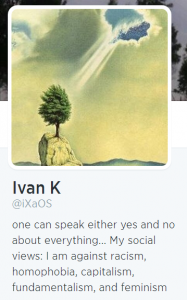 one can speak either yes and no about everything… My social views: I am against racism, homophobia, capitalism, fundamentalism, and feminism

This is what I keep saying. People who recoil in horror at the very idea of being racist or homophobic…proudly declare themselves opposed to feminism. That’s what I don’t get.

Just shitty selfish shittyness, is it? Just feeling threatened? Just not being worried about his white privilege or his straight privilege but worried as fuck about his male privilege?

I don’t know. To me it’s like those Which Of These Things Is Not Like The Others? thing that kids used to do – there’s a bear, a lion, a pineapple, a tiger, and a wolf.

I don’t know. For that list to make sense, it should go: I am against racism, homophobia, capitalism, fundamentalism, and sexism. The way it does go, Ivan is just flattering himself. “I’m right-on except when it might cut into my special extra advantages.”

Maybe he knows that, and that’s why he takes the trouble to pester Pamela Gay.

Thursdays with water » « Catherine Corless: Synopsis of her research on Tuam Mother/Baby Home