Here is the cached version of the page for Utham Badar’s (now canceled) talk at the Festival of Dangerous Ideas in Sydney. 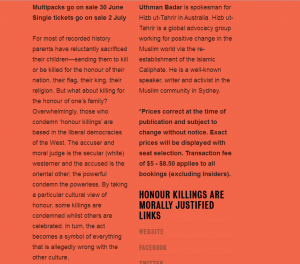 For most of recorded history parents have reluctantly sacrificed their children—sending them to kill or be killed for the honour of their nation, their flag, their king, their religion. But what about killing for the honour of one’s family? Overwhelmingly, those who condemn ‘honour killings’ are based in the liberal democracies of the West. The accuser and moral judge is the secular (white) westerner and the accused is the oriental other; the powerful condemn the powerless. By taking a particular cultural view of honour, some killings are condemned whilst others are celebrated. In turn, the act becomes a symbol of everything that is allegedly wrong with the other culture.

That’s some high-class moral relativism there. Yup we funny people who insist that it’s wrong to murder family members or anyone else for having sex, we’re the secular white western meanies, and the people who think it’s right and good to murder family members for having sex are the oriental other. Shout out to Edward Said! Although I seriously doubt he would be much flattered by the homage of Uthman Badar.

Notice, also, the pretentious pseudo-literary word-juggling, the “critical theory” airs and graces, the palaver about symbols and the epigram about condeming some and celebrating others – notice it and feel nausea at the cynical frivolity, the vanity, the having it both ways, the showing off. This isn’t some fucking game. This is girls and women like those of the Shafia family, pushed into a canal in the family car. This is a girl like Banaz Mahmod, brutally murdered by her father and uncle. This is real girls and women murdered by their real fathers and brothers, it’s not something to preen about and bandy words about on the stage of the Sydney Opera House.

What a piece of scum, this Utham Badar.