To my surprise – I’m always surprised, no matter how repeatedly I see these things; I seem to be incurably naïve – I’m seeing people on Twitter complaining about “radical feminists” making connections between Elliot Rodger’s noisy explicit hatred of women and his murder of some women. It turns out it’s “selfish” and “grandstanding” to make this connection, even though Elliot Rodgers made it himself. 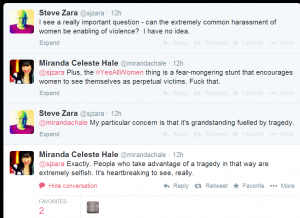 I see a really important question – can the extremely common harassment of women be enabling of violence? I have no idea.

@sjzara Plus, the #YesAllWomen thing is a fear-mongering stunt that encourages women to see themselves as perpetual victims. Fuck that.

@mirandachale My particular concern is that it’s grandstanding fuelled by tragedy.

@sjzara Exactly. People who take advantage of a tragedy in that way are extremely selfish. It’s heartbreaking to see, really.

“Grandstanding fuelled by tragedy”? What does that even mean? People are making the connection between noisy misogyny and violence to…show off? Why would that be the case? How would that work?

Am I “grandstanding” for instance when I pay a lot of attention – public, blog post and social media attention – to the kidnapping and enslavement of schoolgirls in Nigeria by a violently misogynist group of Islamists? Is that “grandstanding”? Is it grandstanding to make a connection between Boko Haram’s misogynist theocratic views and its actions?

And what is “extremely selfish” about making a connection between misogyny and violence? What is even a little bit selfish about that? I don’t see it; I can’t see it.

These aren’t the scruffy pseudonymous photoshoppers, these are serious people, yet here they are fretting (or raging) about the “grandstanding” and “extreme selfishness” of people who see a connection between pervasive misogyny and an incident of violence against women.