Kristine Kruszelnicki of course is the “secular” anti-abortion rights person who wrote that guest post at Friendly Atheist. 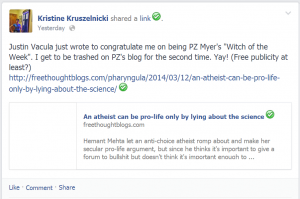 Justin Vacula just wrote to congratulate me on being PZ Myer’s “Witch of the Week”. I get to be trashed on PZ’s blog for the second time. Yay! (Free publicity at least?)
https://freethoughtblogs.com/pharyngula/2014/03/12/an-atheist-can-be-pro-life-only-by-lying-about-the-science/

Of course he did. He is worried about disunity among the atheists.

Pro-babies » « The most vulnerable members