Glendale California has a statue to “comfort women” which was unveiled on July 30 last year. 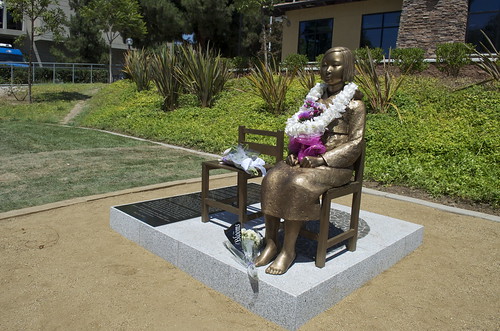 Three members of Japan’s House of Representatives called on Glendale to remove an 1,100-pound statue honoring an estimated 80,000 to 200,000 “comfort women” from Korea, China and other countries who were forced into prostitution by the Japanese army during World War II.

The trio, Mio Sugita of the Hyogo Prefecture, Yuzuru Nishida of Chiba, and Hiromu Nakamaru of Hiroshima, are members of the Japan Restoration Party, a 1-year-old conservative political party that prefers a smaller central government, tax cuts and a hard-line approach to national security.

And no statues memorializing something bad that the Japanese army did in the past.

“The news that the statue was installed made a big noise in Japan,” Nishida said, as it describes the women as sex slaves. “That hurts Japan’s honor.”

Glendale erected the roughly $30,000 statue, which was paid for by Korean groups, in July, and a wave of controversy followed. City officials received thousands of letters from Japanese nationals and Japanese Americans opposing the statue.

Many former comfort women have publicly shared disturbing stories of their servitude and the Japanese Ministry of Foreign Affairs says on its website that some women based in war-area brothels were “deprived of their freedom and had to endure misery.”

But statue opponents, including the three Japanese politicians, say the women acted willingly and claim the estimated number of comfort women is greatly inflated.

In addition to calling for the Glendale statue’s removal, the Japanese politicians also said they wanted the Japanese Ministry of Foreign Affairs to revise its account of the comfort women system and for their colleagues in Parliament to retract an apology to comfort women made by Japanese officials in the 1990s.

In the real world it’s the other way around.