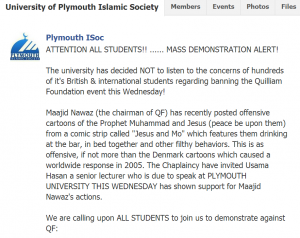 The university has decided NOT to listen to the concerns of hundreds of it’s British & international students regarding banning the Quilliam Foundation event this Wednesday!

Maajid Nawaz (the chairman of QF) has recently posted offensive cartoons of the Prophet Muhammad and Jesus (peace be upon them) from a comic strip called “Jesus and Mo” which features them drinking at the bar, in bed together and other filthy behaviors. This is as offensive, if not more than the Denmark cartoons which caused a worldwide response in 2005. The Chaplaincy have invited Usama Hasan a senior lecturer who is due to speak at PLYMOUTH UNIVERSITY THIS WEDNESDAY has shown support for Maajid Nawaz’s actions.

We are calling upon ALL STUDENTS to join us to demonstrate against QF:

WHEN? THIS WEDNESDAY 29th JAN
TIME? 6:15PM
WHERE? ROLAND LEVINSKY BUILDING (outside the entrance opposite the library)

PLEASE SPREAD THE WORD TO EVERYONE

So we go to the linked Event page.

Join us in protesting and leafleting against the Quilliam Foundation appearing at Plymouth University. The Quilliam Foundation have been invited to speak and we strongly object. The QF founder tweeted on 12th January offensive caricatures of the Prophets Mohammed and Isa (Jesus), peace be upon them. They claim to be a moderate Muslim group but have welcomed right wing extremist Tommy Robinson and Steve Carroll from the racist English Defence League. QF is a think tank that has received over £1million from the government. In return they have provided lists to the govt of alleged extremist sympathisers which included the Muslim Council of Britain, the Muslim Safety Forum and even the Islam Channel.

We do not want the QF in Plymouth, they are a danger to community cohesion and peaceful relationships that exist here between the mainstream Muslim as well as diverse communities. We urge you to turn up and help us protest and leaflet to let people know what QF really stand for which is fuelling Islamaphobia and harming community relationships, and that they are not welcome here in Plymouth.

This event has been organised by both local Muslims and non Muslims.

Deep in my heart, I do believe » « Maajid explains his reasons