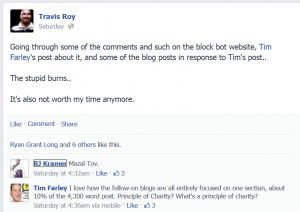 I love how the follow-on blogs are all entirely focused on one section, about 10% of the 4,300 word post. Principle of Charity? What’s a principle of charity?

There is no rule that says you’re not allowed to disagree with one part of an essay or blog post. That rule does not exist. Now if an essay or blog post is one argument and nothing else, such that it’s not possible to address only a part of it, then fine. But that was far from the case with Farley’s post. The part about the list of credentialed people who, in his view, should not be on the block bot list, is separable from the rest of the post, which is much more technical. And people have told Farley that – I’ve told him that, and I’ve seen other people tell him that. It’s not hard to figure out, in any case. The principle of charity has nothing to do with not disputing one part of a long piece of writing unless you address all of it.

Holy holy » « When talking to a woman, be sure to add gratuitous insults