Reactions from the other direction also give us reasons to take Ron’s apology as genuine. 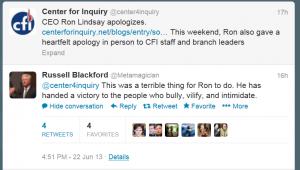 @Center4inquiry This was a terrible thing for Ron to do. He has handed a victory to the people who bully, vilify, and intimidate.

He goes on in the same vein.

By giving an apology, @RALindsay hands a victory to people who trash and vilify opponents for reasonable disagreement.

There was nothing wrong with @RALindsay’s remarks. They were correct, diplomatic, and timely. He should withdraw his apology.

@RALindsay should not have apologised for anything.

You know…I’m all for internationalism, but internationalism doesn’t mean just brashly meddling in other people’s organizations and internecine quarrels from the far side of the planet. That’s colonialism rather than internationalism. I’ve never been able to understand why Russell feels entitled to meddle so energetically in the affairs of US secularist organizations. I don’t feel entitled to do that when it comes to UK or Indian or Australian organizations. Why does Russell carry on as if CFI were accountable to him?

The intersection between rationalists and feminists » « Onward