The Guardian had a bit more yesterday on UCL’s decision not to be besties with iERA any more. Most of it we already know, in fact some of it could have come from here, but it tells us some new things.

Saleem Chagtai, head of PR at iERA, expressed disappointment at the ban and denied that the group had tried to enforce segregation at the event.

The group has put a time-lapse video of the audience taking their seats before the event on YouTube. But as there is no sound, it does not reveal whether or not men and women were asked to sit separately when they came into the lecture theatre.

It is also unclear whether the video ends when the whole audience had arrived and taken their seats.

The time-lapse video is totally unhelpful, and it’s laughable that they pointed to that to back up their claim of no enforced segregation. Mostly what the video shows is that there were very few women visible.

Chagtai claimed that the group had offered audience members separate seating, with mixed-sex seating at the front of the lecture theatre with rows only for men and women who wished to adhere to their religious beliefs further back.

Chagtai claimed that the group had offered audience members separate seating, with mixed-race seating at the front of the lecture theatre with rows only for whites and blacks who wished to adhere to their religious beliefs further back.

He said: “I would classify segregation as people saying, ‘you’re a white you sit there, you’re a black you sit there’. We understood that we could not enforce separate seating but we could facilitate it.”

It’s not a thing that should be “facilitated.” The world doesn’t need people “facilitating” inequality and domination/subordination.

UCL spokesman Dominique Fourniol said representatives of iERA met the university’s senior administrative officer, vice provost Rex Knight, and a diversity officer on Tuesday when the issue of segregation was thoroughly examined. He added that the event was not originally booked by iERA but an individual.

Oh yes? That grad student in the chemistry department perhaps? That sounds like more trickery and deception and bait-and-switch.

Speaking of trickery…Christopher Roche – the guy the iERA tried to eject from the debate for sitting in the “women’s” section, you remember – told me about this piece in the Standard and especially the comments on it. 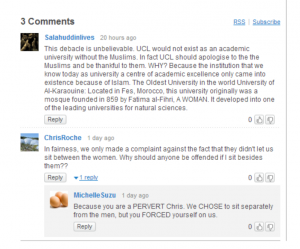 This debacle is unbelievable. UCL would not exist as an academic university without the Muslims. In fact UCL should apologise to the the Muslims and be thankful to them. WHY? Because the institution that we know today as university a centre of academic excellence only came into existence because of Islam. The Oldest University in the world University of Al-Karaouine: Located in Fes, Morocco, this university originally was a mosque founded in 859 by Fatima al-Fihri, A WOMAN. It developed into one of the leading universities for natural sciences.

In fairness, we only made a complaint against the fact that they didn’t let us sit between the women. Why should anyone be offended if I sit besides them??

Because you are a PERVERT Chris. We CHOSE to sit separately from the men, but you FORCED yourself on us.

That “ChrisRoche” who commented? That’s not Christopher Roche. The deceptive trickster shits impersonated him.

Notice “Salahuddinlives” – perhaps the same commenter who commented here as both “Adam Stanford” and “Salahuddin” on Monday. And I doubt that “MichelleSuzu” is a woman at all – the same person probably did all three comments.

What sleazy people they are, these people who want to take away our rights.