A guest series by Bruce Everett

Day one – Thursday: It begins…

… or the fringe events begin, at any rate.

I’ve arrived in Melbourne, being greeted by more than a few pubs with closed doors and ‘For Sale’ signs, and hijab or ten. The voice of an invisible, satirical yokel cries in my mind ‘Sharia law! This was a Christian nation’.

We don’t have the same presence of far-right, totalitarian, Islamic groups here in Australia that Europe has. Our yokels object to Muslims, not Islam (which they don’t know anything about – ask them what they think of Wahhabism, and they’ll probably tell you they don’t like sushi), while our political left remains somewhat oblivious to the ways far-right political Islam can manifest, and don’t seem to understand why others on the left may have concerns.

(Indeed, given that moderate Muslims in migrant communities are often the first to be pressured/bullied/harassed by Islamic extremists in western nations, being reflexively blind to such extremism makes portions of the left bad friends to Muslims).

However, unless you encounter the yokel, the political RadiCool, or the occasional sanctimonious wonk, discussions of issues of religion and politics are comparatively laid back inAustralia. We don’t have to worry about genuine critics of Islam being marginalized by the media, the way Maryam Namazie has been sidelined by the BBC in the UK, nor do we have to worry too much about secularists being sent death threats the way Jessica Ahlquist has been targeted by cowardly Christian nationalists in the US.

(And no, Andrew Bolt is not a victim of ‘political correctness’.)

I’m a vegetarian, in much the same ethical tradition as ethicist Peter Singer, a speaker at the Global Atheist Convention. Finding vegetarian-friendly meals on the fly while travelling can be a little trying, but thankfully I’ve had a little advice in advance, and tried out a local chain of vegetarian fast food: Lord of The Fries. 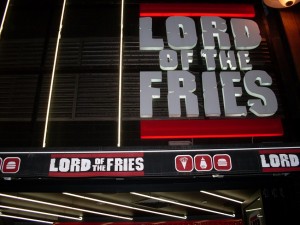 Lord of the Fries… No piggy served here.

It’s not the kind of place I’ll be eating at too regularly – cost and dietary concerns prohibit that. However, the food was truly wonderful, and worth every cent. I have my doubts anything like this could succeed in my hometown of Adelaide, but it’d be nice.

A cheaper vegetarian meal was sought in the Melbourne suburb of Preston, successfully, although the encounter raised an interesting issue. On shelves and on posters in the bakery sat propaganda for the ‘Supreme Master’ cult – a movement which has been advertising semi-regularly onAustralia’s multicultural, free-to-air television station, SBS.

This was hardly an interfaith exchange – my buying a vegetarian curry pie and sausage roll for cold hard cash. And it would be safe to say that I’m less than impressed with the way the ‘Supreme Master’ goes about the business of animal welfare and environmentalism. But in as far as we shared values, there was cooperation, differences notwithstanding.

On Monday night I’ll be going to an event hosted by Meredith Doig, and featuring Leslie Cannold, PZ Myers, and Chris Stedman, where the question will be asked, ‘can believers and atheists work together for the common good?’ I suspect my example fromPreston, amongst countless others, confirms a ‘yes’.

Honestly, I can’t think of a good, general secular principle binding me to not cooperate with believers. I guess you’d have to ask believers what their God (or ‘Supreme Master’) thinks, to see if there was an issue on their end.

In passing, I wonder just how much cooperation an infidel like me could expect from the staff of East Preston Islamic College or from the Islamic college at Werribbe – since arriving in Melbourne, I’ve heard rumblings from godless secularists and moderate Muslims alike, of concerns about Wahhabist overtones in the curriculum. This is second-hand anecdote, of course, not rigorous social science; perhaps Melburnian lefties will investigate rather than leaving it up to the Murdoch press.

Believer or not, most Australians don’t want divisiveness…although we argue endlessly about what it is and how to avoid it, with various levels of competence (when we’re not busy being too laid-back, that is.)

My Thursday night’s event of choice, which meant missing out on Dan Dennett and Peter Singer, was a discussion of Sean Faircloth’s ‘10 point plan’ on how to push secularism forward, and how a similar approach could be adopted in Australia, held at Embiggen Books. The discussion featured secularist power-houses Russell Blackford, Meredith Doig and Graham Oppy.

Near-consensus seemed to be reached that a series of such points should, at least in an Australian context, represent underlying secular principles from which specific policy points emerge, rather than being a shopping list of policy wants (which is pretty much what Faircloth’s list is). The difficulty in this however, it was suggested, was making such a series of points politically relevant and attractive to Australians. Abstract political concepts aren’t the easiest thing to sell, especially when you’re running up against savvy evangelicals and Australian Rules football.

Retellings of the consequences of sectarian policy, such as the suffering caused by a historically religious prohibition against same-sex marriage (now a wolf-in-secular-sheep’s clothing on account of concocted concerns about child welfare), have had increasing impact over the last twenty years upon Australia’s attitude towards marriage equality. Stories of human experience are necessary, in addition to secular philosophy, and scientific investigation of empirical truths (please consider this and this). 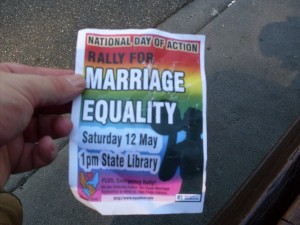 There were many substantive matters discussed on the night, including the matter of free speech, which unlike as in the US, isn’t a particularly well protected right in Australia, if a right at all. The agreed-upon place for the continuation of the night’s discussion is over at Russell Blackford’s blog, in the comments of a recent post (here).

The evening concluded with Russell and Jenny Blackford and Graham Oppy, leading VIP Debbie Goddard, and a bunch of Adelaidian misfits off to The Moat, under the Wheeler Centre, for drinks and a chin-wag. I must have been getting tired, because some of the details are a little hazy, and I only had one drink (a nice little pinot) – I do recall misplaced apostrophes being found in the menu, and Archbishop George Pell being the butt of a joke.

Maybe I shouldn’t be revealing these kinds of details anyway. Hopefully though, my constitution can withstand the full force of the convention proper!

Celebrating the GAC » « Proud to be former