No, the crisis of faith isn’t supposed to be the horrifying part. It’s a murder mystery called The Faithful that’s coming out October 1:

Conflicted with his faith in God and the hypocrisy of the church, Aidan, an assistant pastor, is already a spiritual battleground. When he learns that his ex-fiancee was murdered in a possibly demonic ritual, he finds himself catapulted into an even deeper fight. Tormented by demonic threats and haunted spirits in the afterlife, Aidan becomes a medium that will hold the key to solving this murder mystery. As Catholic priests, paranormal investigators and rogue law enforcement seek Aidan out, readers both secular and religious will find that the Faithful tears at the emotions and doubts of humankind. 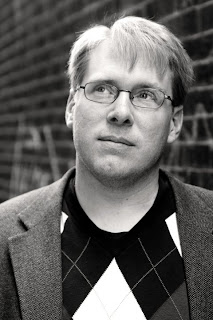 Jonathan Weyer is a campus minister at Ohio State University and is ordained in the Evangelical Presbyterian Church. He is the founder of The Thomas Society, a student-led ministry dedicated to answering questions from skeptics, doubters, agnostics, and atheists. Jonathan is also the only Christian minister to have been added to the Secular Student Alliance speaker’s bureau. During the transition from church to campus ministry, Jonathan wrote the Faithful, combining his love of scary stories and his experience with doubters. He lives in Columbus, Ohio with his wife Wendy, three kids, and a crazy cat.

For the sake of full disclosure, you should know that Jon and I are friends. Jen friends with a minister?! Shocking, I know. I haven’t read the book yet, but if it’s half as engaging as Jon is in person, it’ll be wonderful. I’m sure his constant exposure to us crazy atheists will help him handle the “crisis of faith” in a non-cheesy way… though I have a sneaking suspicion the pastor will see the light. ;)

And hell, if you can’t plug your friend’s book on your own blog, what’s a blog good for?

I shrugged, “Yeah, you’re right. Natural, I guess. But, first, let me ask you a question.”

She raised her eyebrow at me as took a sip of her ginger ale. “Ask away, preacher.”

“What do you believe?”

“About God? I guess I believe there is one.”

“What does that mean?” I asked, folding my arms across my body, taking my “I’m going to teach” position.

“Well, I guess I’m not sure. I mean, I was raised Catholic, but I don’t go to Mass much anymore. I don’t hold to most of what the church teaches.”

“Doesn’t that usually go with being an American Catholic?” I asked, smirking a bit.

“True,” Jennifer said. “I guess I have my own religion. You know, I believe in God and spirituality. I’m spiritual, but not religious.”

“Okay, let me stop you there. What does that mean, spiritual but not religious?”

She stared out the window, watching the Gallery Hop crowd pass by our table.

“You know, I have never really thought about it. I guess it means acknowledging God, being thankful, nice to people, helping in the community and all that. I guess a little praying gets thrown in there too, especially on some of the cases I have to investigate.”

“Okay, so this God you pray to, what is He or She like? Can you describe this entity?”

“Exactly. Why do you need God to be a good person, to be nice and all that? You don’t.”

She folded her arms across her chest.

“So, who says what’s nice? Someone has to enforce the law.”

“So, God is a universal cop? That’s comforting.” I tried to keep the scorn out of my voice.

“No, I mean, laws come from somewhere right?”

“Sure. Society. It’s in the best interests of society for laws to be made.”

She slowly nodded her head. “I see what you’re saying, but I don’t buy it.”

“But what do you buy? This God you can’t define other than good feelings or ‘facts’ that you can’t prove?” I had leaned in close, far enough that our faces were almost touching.

Jennifer backed away, slowly nodding her head. “I guess, but I have hard time believing there isn’t something out there.”

“I suppose I don’t believe in God anymore because I see no other alternative,” I said. “I think the whole vague, spirituality thing is a crock, excuse me. Either believe in God, do what he says, or don’t. Why try to have both? It’s just hypocritical holding on to the notion of God without any of the responsibilities.”

You can pre-order a copy of The Faithful here.

Help is no longer needed in escaping Indiana » « September 11, Islam in America, & “Burn a Koran Day”