I’ve never been a fan of Barbie (shocker, I know). My family always tried to buy them for me, but I wanted nothing more than to play with Legoes all day. But it looks like Barbie has a interesting new profession: She’s been a princess, a firefighter, a Marine and a ballerina. After years of soul-searching, Barbie has finally found her true vocation. Meet Rev. Barbie, a plastic Episcopal Priest.

Rev. Barbie, the creation of Rev. Julie Blake Fisher, an Episcopal priest in Kent, Ohio, has her own Facebook page and comes dressed in the latest trends in clergy-wear.

Fisher created Rev. Barbie for use in her own youth ministry: “I thought the children would like to practice playing with the vestments and learning what they are,” she told Religion News Service. Over the years, Barbie’s many vocations have served as inspiration for young girls. And although Mattel has not endorsed Fisher’s improvised Reverend Barbie, the plastic priestess has emerged at a critical moment in Christian history, especially for women.

Man, why should religious people get to have all the fun? I want an atheist Barbie! (click for slightly larger image) 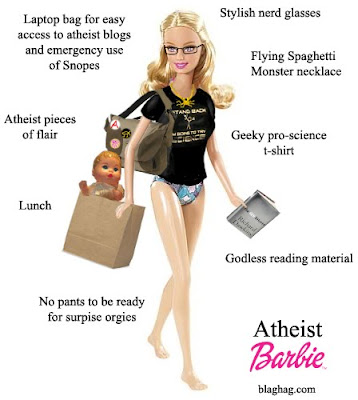 Finally, a Barbie doll that represents my every day life…

Christians on atheists FFFFUUUUUUUU » « A Christian, a Muslim, and an atheist walk into an classroom…