Yes, I just can’t stop posting! Or as PZ said, “I think the blogathon has permanently warped her brain.“

After our trip to the Creation Museum, we drove north to Columbus, OH for the Secular Student Alliance conference. Passed two signs that each had five of the Ten Commandments (I think Mark was waiting for a third sign to appear), and stopped in a rural gas station totally forgetting I had atheist buttons and stickers all over me. Whoopsie. I already mentioned how when we were checking into the dorms we watched part of an episode of Wife Swap featuring an atheist and evangelical family with PZ, which was good fun. Oh, and the fact that PZ’s dorm room was directly across from ours. Weeeeeee. 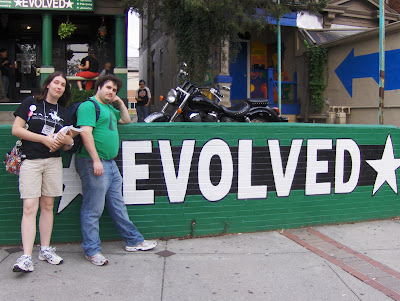 There were a lot of great talks at the conference, covering activism, basic club running, volunteering, cooperation with other groups, and just some silliness. I met a lot of great people who I knew of but I had never personally met – Jesse Galef, who works for the Secular Coaltion for America and sometimes posts at Friendly Atheist; Debbie Goddard from the Center for Inquiry, who helped bring Eddie Tabash to Purdue last year; Lyz Liddel, the SSA’s Senior Campus Organizer, who has helped our club so much and delt with thousands of my emails; Ashley Paramore, who video blogs as healthyaddict; Jon Sussman, who I talked to for various SSA things and who made a big list of topics for me for my blogathon…and I’m probably forgetting people, so I apologize. I also met a lot of cool people from Indiana, and I really want to try to organize some state wide freethinker event.

The talks were excellent, but I don’t want to talk about them too much since they’ll be online soonish, and then I’ll link you to my favorite ones. And I’m totally burnt out from all those other posts, heh.

– Meeting people who read my blog! It was very cool and weird having people saying “Oh, you’re the Blag Hag!” (which, in retrospect, was an unfortunate name choice). If I looked freaked out I promise I wasn’t – I’m just sort of socially awkward and not used to this whole random-people-knowing-me thing yet. Hi everyone!!
– Someone asked me for my first autograph! A student had PZ, Hemant, Ashley and me sign two Creation Museum tickets, and they’re going to try and auction them on eBay so they can start a club at their university! Unfortunately, I’m pretty sure my signature just devalued them…
– Jon Weyer, a Christian minister who gave a wonderful talk about cooperating with religious groups, had a little contest where the first six people who could name what PZ and Ken Ham were riding in my comic would get a free book! Seeing all the people who ran up there was very cool. I then shunned one of my close friends because he got it wrong. Boo.

– They used my I Squid Cephalopods design for some of the signs! 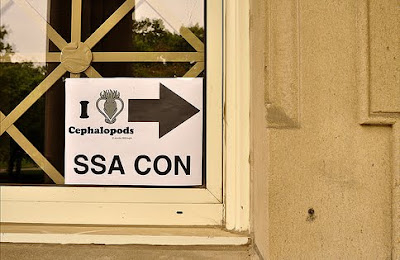 Photo by evodevo_mike
– My group of Purdue people and Hemant went to Buffalo Wild Wings for some much needed relaxation…and after spending the day in the Creation Museum, I had a MUCH needed giant glass of beer. Mmmm Blue Moon. Oh, and being outnumbered by math geeks at the table was interesting…
– PZ actually remembered my name, which I did a little internal fangirl flail about. 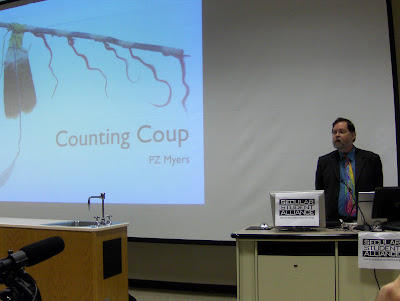 – PZ also said he reads all of his comments on his blog, which I find absolutely amazing. Oh, and just so you know, I do too – I get so excited when I get emailed about a new comment.
– Playing freethought trivia games. Sadly I could recite the Chinese zodiac, yet couldn’t name more than four of the last ten US Vice Presidents. Ultimate failure. I could practically feel my history teacher father’s scorn from miles away.
– Watching people play “throw the atom bombs in the volcano to blow up the Thetans” while wearing Xenu crowns: 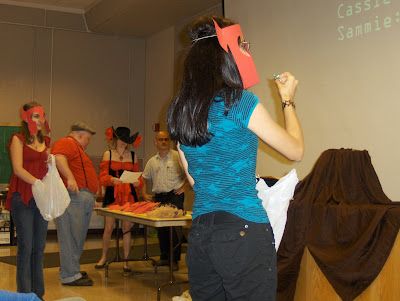 – Saturday night had incredible fun socializing and PZ actually attended, and I’m pretty sure I can’t say much more than that (but Jesse already said it involved Captain Morgan, so draw your own conclusions). Multiple male students commented on my boobs, so I’m pretty sure they weren’t listening to Hemant’s atheist dating advice.
– A group of us decided that a required session for next year’s conference should be a “sexy lingerie party.” Still trying to convince people about that one.
– Collecting way too much atheist flair (plus a FSM one which you can’t see in this photo): 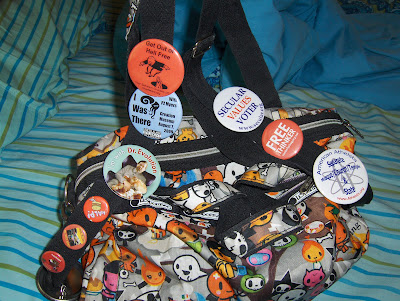 – Listening to George Carlin for three hours on the drive home.
And I may not have gotten to ride the Triceratops at the Creation Museum…but I got something even better (click for larger): 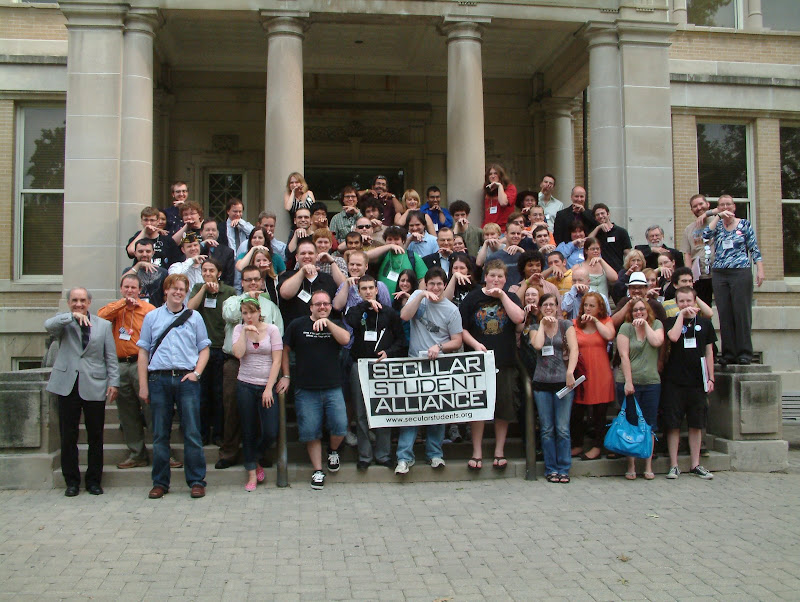 Photo by Gus Brunsman
The whole conference making Cthulhu faces! Though no, we didn’t all transform into Cuttlefish. I guess PZ wasn’t trying hard enough.

As long as I can travel there, definitely looking forward to going to the conference again next year! It was super fun and got me totally motivated for this upcoming school year. Now, time for me to go plan club events!