Anyway, Friendly Atheist shared this idea for the “Atheist Bust Campaign” the other day: 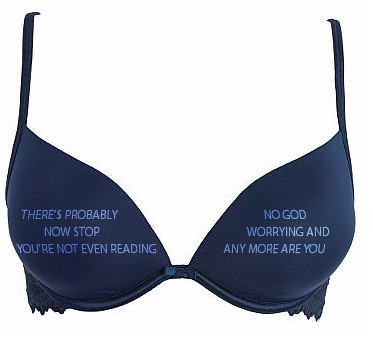 Other than the fact that it’s hard to read (should be one phrase per cup!), I personally thought it was hilarious. Bus. Bust. Har har. A play on words, plus it’s a bit ridiculous – who would expect to see this on a bra if you’re getting hot an heavy with some girl? What a silly way to advertise! Funny, right?

“Do we really need to objectify women to make our case? This seems pretty tasteless to me.”

“I know it seems to be the consensus that anyone calling this sexist needs to “lighten up,” but I’m pretty sure this is exactly what stopped a lot of people from listening to Peta (in addition to a variety of other hypocrisies of course, but this is one reason). Objectification is bad no matter who does it, and it’s especially annoying as a feminist to see another cause I care about wanting to use it in order to reach out to nonbelievers.”

“I find the ad mildly offensive and somewhat humorous, but I’d be much less annoyed if there were another ad showing off a close up of men’s filled out briefs. But then that begs the question of what exactly do a bra and briefs have to do with the message here?”

“For those of you suggesting that the users who rightfully mentioned this should just “lighten up,” I ask–do you really want atheism reflecting such narrow-minded views about gender stereotypes, too? Atheism is supposed to be a part of the movement of intelligible REASON. It’s bad enough the religious are so willing to persecute women for being even remotely sexual and the LGBT community for merely existing. Also, if you disagree that subtle forms of sexism–even sexist humor–can be harmful to women, I suggest you read up on the stereotype threat literature.”

The comments for this post annoy the crap out of me. Yes, you all need to take a fucking chill pill, and that’s coming from a fellow feminist. It was one joke based on a play on words. Maybe if there was a national campaign dedicated to nearly naked skeptic girls without equally nearly naked skeptic dudes, then I’d see the objectification and problem with exploiting female sexuality for advertisement. But it’s not. The Richard Dawkins Foundation isn’t funding it; there’s no grassroots atheist boob effort. Maybe if we had been the “Atheist Class Campaign” the joke would be a booty for the “Atheist Ass Campaign.” “Atheist Dunk Campaign” would be “Atheist Junk Campaign” and we could all stare at some guy’s crotch. My point is, the person who made this image probably wasn’t going out of their way to objectify women – bust just sounded like bus, and the idea of atheist advertisements on bras is ludicrous and funny. I hardly see how a single joke is equivalent to PETA’s trashy campaigns or religious oppression of women and LGTB groups.

Are we not allowed to joke about anything sexual at all because of the fear of not being politically correct? My friends and I make jokes that uber-feminists would consider sexist, but you know what, it’s about context. We’re not making them because we think it’s true that women are dumb or emotional or whatever – we make them because we think it’s ridiculous that people actually do think that way. We’re mocking people’s intolerance. I don’t Feminist Avenger Punch my guy friends when they jokingly tell me to get in the kitchen and make them a sammich. Why? Because I know how to take a joke. If they were the type of males who actually believed that, I wouldn’t be friends with them.

This is why a lot of times I hate calling myself a feminist. I want equal pay, equal opportunities, etc, etc… Why don’t we worry about the big problems instead of flipping out over a joke about a bra? Yes, we should have concerns about the objectification of women in our culture – but when it’s something minor like that, I think we all need to calm the fuck down. I hate the fact that I’ve been told I’m not a “real feminist” because I’m not totally extreme. I had a friend once try to argue with me that shaving your legs was just conforming to the oppressive patriarchal rules, and if I disagreed with her I was just not educated enough to understand. No, I fucking like having smooth legs. It feels good. Even if it’s a symbol of the higher standards of beauty women face, I really don’t care. And that was an argument from someone who wears make up, and I don’t wear any. Should we start a jihad against lipstick because of what it symbolically represents, or try to tackle the bigger problem of women’s self image and social standards of beauty?

That being said, here’s a SMBC that I like to believe was released today especially for this post:

Now if you excuse me, I’m going to go prepare myself for the upcoming feminist flame war. *crawls in her barricade*