This article is part of a series discussing capitalism and socialism.  Remember, the point isn’t to conclude that socialism or capitalism is good or bad.  The point is to discuss which aspects are good or bad, and why.  Don’t treat me as an authority, tell me how wrong I am, discuss.

Last time, I introduced the idea that labor has a certain maintenance cost, and creates a certain amount of value.  The “surplus” is the difference between the value output and maintenance cost.  In the discussion, we agreed that it’s difficult to define the productivity of each worker.  Usually, many workers are cooperating to make the final product, and you may even have workers who are there to improve the efficiency of other workers.

There are two responses to this.  One response is, even if we can’t define it on an individual basis, we can look at worker productivity and worker pay on a macro scale, and see that workers are getting paid less and less of the surplus.

Another response, is a question.  In the current capitalist system, how do we evaluate worker productivity for the purposes of determining their wages?  The answer lies in the idea of marginal productivity. 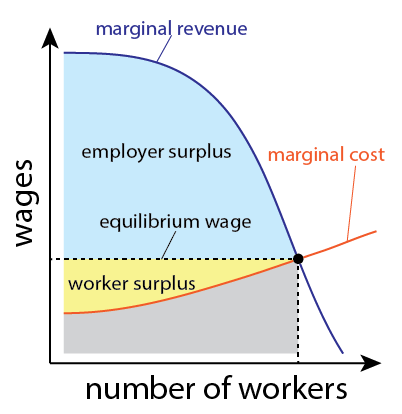 Image mine. Use with permission.

The above image is a standard graph, as might appear in an introductory economics course.  I will take a moment to explain all the different elements, for those who are not familiar with such graphs.

There seem to be several parallels between this simple economic model, and the idea of exploitation of labor:

Of course, the correspondence between the simple economic model and the exploitation of labor model is not necessarily exact.  For instance, in the theory of exploitation of labor, the maintenance cost of labor is equal to the cost of living.  In the simple economic model, the marginal cost is not necessarily the cost of living, it could also include the opportunity cost.  For instance, if there’s a soup can factory and a bread factory next to each other, the soup can factory has to pay enough not just to cover the workers’ cost of living, but also enough to persuade them to make soup cans instead of bread.

Now, let’s talk about the distribution of surplus.  I drew the graph in such a way that the employers are getting the lion’s share of the surplus, although they do not get all the surplus.  This is meant to be suggestive of what may be happening in reality.  In this economic model, the distribution of surplus really has nothing to do with any concept of fairness (unless you define the outcome of the model as fair).  It’s just determined by the steepness of those marginal revenue and marginal cost curves.

And yet, when I hear socialists complain about the exploitation of labor, I get the sense that they’re not just saying that the equilibrium wage is unfair.  They also argue that employers wield political power to defeat the assumptions of the model, and push things in their favor.  The simplest version of this, is that employers can exploit the cost of finding and switching to a new job, and become something like a monopoly to its workers. 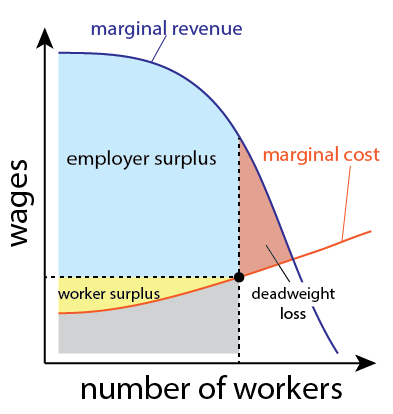 A market with an employer monopoly (technically, a monopsony). Not to scale.

Under a monopoly, the total surplus is smaller (by an amount equal to the area labeled as “deadweight loss”), but the employer doesn’t care because their share of the surplus is larger.  And the worker surplus gets smaller.

Please feel free to question any other assumptions I’ve made, and also suggest future topics.

The primary election is the election » « Link Roundup: May 2019