As you can see, I took a brief blogging break… and during Asexual Awareness Week too.  But I don’t believe in apologizing for that sort of thing.

Two years ago, I spotted an IFLScience article about my particular field of research.  The article’s title?  Crucial Superconducting Theory Confirmed.  I remember chortling over the absurd idea that superconductivity would be solved, and that the first place I’d hear about it would be IFLScience of all places.

As I read the article, I realized how familiar I was with the research being discussed.  I knew Chandra Varma, a famous superconductivity theorist.  I had already read the scientific article they were talking about.  And one of the authors on the paper was a close colleague.  Small world, eh?

Anyway, I found the article interesting as a tiny little case study on science popularization.  Let’s go through the article, starting with the title.

The thing to understand is that theories of superconductivity are being confirmed and disconfirmed all the time.  That’s kind of how scientific mysteries work.  It’s not like everyone just sits around being really stumped.  It’s more like, everyone has an answer, but the community doesn’t agree on which answer is correct.

Superconductivity promises to revolutionize our world with efficient transport, cheaper electricity, and even hoverboards. Although it’s still a long road to that technology, a crucial theory has just been confirmed that could help.

The superconducting state happens suddenly when electrons in the material join in pairs. This formation is due to internal electrical currents that form the state when the right conditions arise. The theory was first proposed in 1989 by Professor Chandra Varma, and now he and colleagues from China and Korea have successfully proved it.

Professor Varma’s theory, called loop current theory, is one of several theories proposed to explain why electrons form pairs.  High-temperature superconductors contain a lattice of copper and oxygen atoms, and the theory is that electrons travel in little loops between the atoms.  Somehow, this loop current state enables electrons to pair up. 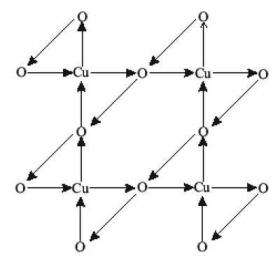 Image credit: Chandra Varma. I found this image attached to an article titled, “20-Year-Old High-Temperature Superconductivity Theory Verified“, from 2006.  So apparently it was verified in 2006 and confirmed in 2016.

I don’t claim to understand loop current theory, much less all the arguments for and against it, but I like it.  I would give it maybe a 5-10% chance of being correct?  In fact, I had discussed with Professor Varma some possible experiments to confirm/disconfirm loop current theory.  But there were issues and my PhD ran out of time.

The experiment conducted at the National Laboratory for Superconductivity in Beijing used a laser to precisely measure the energies of the coupling electrons. The values were so accurate that it allowed them to prove that Varma had the right idea all along. The findings are published in the latest issue of Science Advances.

This is the only part of the article that actually discusses the research that “proved” loop current theory.  It’s not very clear, is it?  I don’t blame them.  The Science Advances article is very difficult to understand, even for people in the field.  I’ll do my best to explain.

In conventional superconductors, the reason why electrons pair up is because they interact with vibrations of the ionic lattice (i.e. the atomic nuclei).  Because it’s a quantum system, all excitations come in discrete packets, and “phonon” is the term we use for a packet of ionic lattice vibration.  Electron pairing is mediated by the electron-phonon interaction.

In high-temperature superconductors, we don’t understand why electrons pair up.  However, some people believe that it’s mediated by the interaction between the electrons and some excitation in the system.  By measuring electrons with lasers, we can detect a whole spectrum of excitations that the electrons interact with.  But while we can tell the energies of these excitations, it’s difficult to identify what the excitations are, or to determine whether they contribute to superconductivity.

The Science Advances study uses a very complicated model that predicts slightly different observations depending on whether the excitations contribute to superconductivity or not.  Then, using a precise experiment, they separate the spectrum of excitations into a spectrum that contributes to superconductivity, and another spectrum that cannot.  They also show calculations using loop current theory, and argue that it’s consistent with the observations.

While I may mock the idea that this paper has “proven” loop current theory, in my expert opinion this is stellar research.

The critical temperature for all the superconducting materials is still significantly below zero, with the hottest superconductor still needing to be cooled to a temperature of -70ºC (-94ºF). But the scientists think their research could help develop room-temperature superconductors, which would allow for more efficient technology that doesn’t overheat, faster transportation, and more advanced scientific and medical instruments.

“I can in my theory predict precisely the parameters that a material must have in order to get higher temperature superconductors,” said Varma. “How can chemists and experimentalists (who make those materials) achieve those parameters? I can’t directly say, but the theory points to a certain direction.”

Origami: Star with spirals » « Just how bad is evolutionary psychology?