Last March, I attended the APS March Meeting, which is the largest annual physics conference in the country (and perhaps world?). During the conference, one of the particularly memorable sessions was about quantum gamification, making games using concepts from quantum physics.

Quantum games are an interesting concept, because usually “physics-based games” are only based on classical physics, specifically gravity and collision. The point of having a physics-based game is to have a relatively complex system where you don’t need to teach players every single detail, because they already have an intuition for how gravity and collision work. But obviously, when it comes to quantum physics, players don’t have an intuition, thus the physics must serve some other purpose.

In most of these games, the nominal purpose is either (a) teach physics, or (b) use player data to help physicists. Although I get the sense that the nominal purpose is not always the true purpose. I’m not that confident in the value of collecting player data, and suspect that the true purpose is more about public outreach. And some of the “outreach” projects kinda felt like they were just a way for physicists to do something fun. Well, whatever persuades people to give you grant money.

Anyways, let’s check out some of these games. 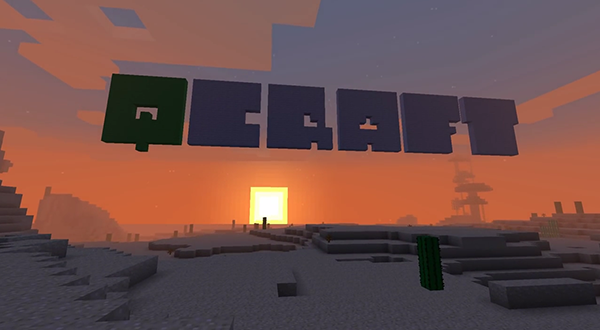 The most impressive attempt at a quantum game was a Minecraft mod called qCraft. This is the one that felt the most like a successful outreach effort, because they were exposing a lot of kids to quantum mechanics.

I should mention, I’ve never played Minecraft, although I have nothing against it. So I haven’t tried this game myself, but I saw a live demo at March Meeting. Basically, they add some new blocks, such as blocks that “collapse” into a particular block type whenever you look at them. And if you look at them from different angles, they might collapse differently. You could also entangle blocks together. (The speaker noted that you could entangle more than 2 blocks, violating the monogamy principle, but whatever.)  As far as quantum mechanics goes, this is fairly basic stuff, but it’s a nice introduction. 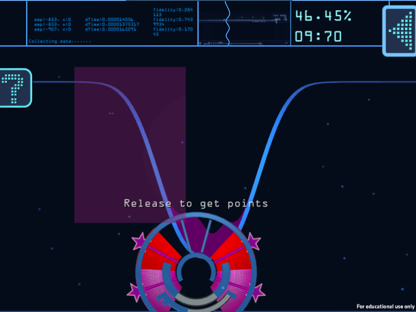 Quantum Moves is a game that you can download for free for your mobile device. Basically, you use your finger to drag a potential well, in order to move a quantum particle from point A to point B. The goal is to optimize the time, and probability of success. This is one of those games where player data (supposedly) helps researchers. Apparently this is a difficult optimization problem, and in some cases humans outperform state-of-the-art algorithms. There’s even a paper about this.

As a game, I have some negative things to say about this. First, the interface is so busy, I don’t really understand what’s going on. Second, the frame rate was uneven, which is completely intolerable in a game that’s all about smooth motion. I didn’t really feel like I was outperforming any algorithms. 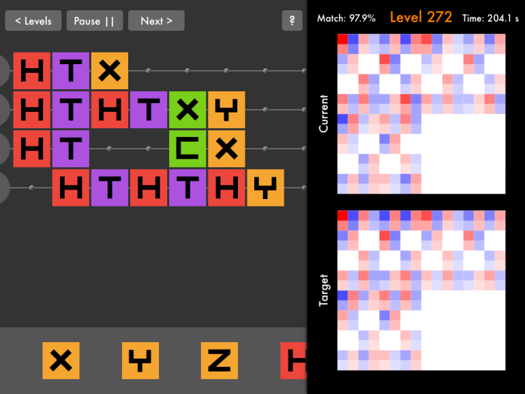 Next, my favorite game of the bunch. Meqanic is a free mobile game about chaining operators to manipulate a grid of colored squares. It’s what I call a “group theory puzzle”. The best-known group theory puzzles are the Rubik’s Cube and Fifteen.

I think this is a lot better than a Rubik’s Cube. The accessible states of a Rubik’s Cube form a finite alternating group, so all you need to solve it is figure out a way to switch two pairs of cubies (reductively speaking). In Meqanic, the group is rather more complicated, and also infinite in size.

What does this have to do with quantum mechanics? The game doesn’t mention it. You don’t even need to know it’s related to quantum mechanics to solve it. But me being a physicist, I could immediately see that the group theory was based on manipulating qubits. And I have to admit that understanding the physics helped me understand what the hell C-Not operators do. Incidentally, I’m one of the top Meqanic players in the world now, LOL.

The talk about Meqanic got cancelled, and I only found about it from the conference program. I would have been interested to hear about the design philosophy and purpose of this game.

Quantum chess is advertised in the above thoroughly ridiculous video, starring Keanu Reeves, Stephen Hawking, and Paul Rudd. It’s basically chess, but you have the additional option of “quantum moves”. A quantum move splits the chess board’s wavefunction such that a piece has a 50% chance of moving twice. The state of the board collapses only when two pieces have wavefunctions overlapping on the same spot.

The interesting thing about this game is that the full quantum equations are there. Entanglement and interference are just the beginning of the possibilities.

Of course, it’s really hard to show this, and indeed the board does not show the full game state. The game was really confusing, and I found myself wishing it were some sort of sandbox game rather than a chess game so I could figure out what was actually going on. 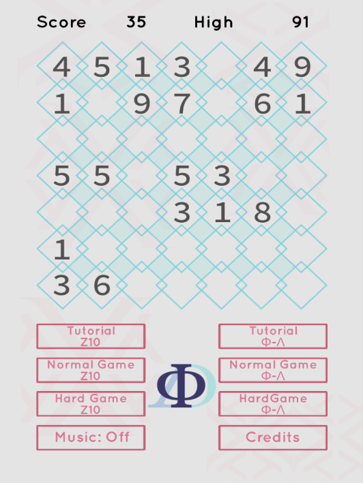 Decodoku is a game based on quantum mechanics, but a part of quantum mechanics that usually doesn’t get talked about. It’s about quantum error correction. Admittedly, I know nothing about this. There are three different versions of the game, each of which can be downloaded separately for your mobile device. One is to find the quantum errors, one is to solve them, and the last is to do both together.

They present themselves like puzzle games: a square grid with numbers and symbols. Puzzle snob that I am, I played it, and came up with a series of complaints about how it didn’t conform to my expectations about puzzles. The optimal strategy wasn’t too hard to figure out, and beyond that all you can do is hope the RNG doesn’t screw you over.  The creators act like there’s some deeper strategy to it, but I’m unconvinced.  And I still don’t understand what quantum error correction is. 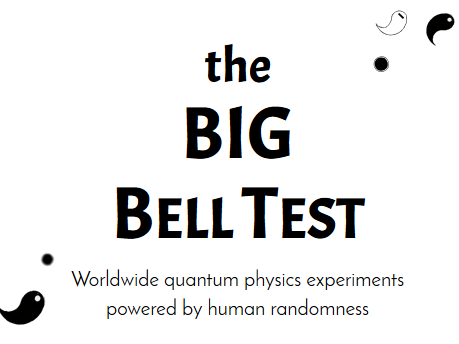 This is the last game I’ll talk about, and it’s in the category of games where player data helps physicists. Basically, The BIG Bell Test has you typing a series of 0s and 1s such that they’re as unpredictable as possible. This random string of digits is used for some Bell experiments.

Admittedly, I missed this talk. I went to another one held at the same time. So I don’t really understand why this is necessary. Also, how can you take human input and extract only the random parts? Humans are terrible random number generators. Well, I imagine it’s okay, as long as the string of digits you type isn’t correlated with far-away physics experiments. It might be good for outreach too.