Someone asked about health issues, for now my health continues to improve incrementally, the pic below was taken a few mins ago right out of the shower. That’s me at a lean, spanking 155 lbs, down almost 50 lbs from my obese max. Having a heart attack and, as it turns out, an underlying blood chem disorder that facilitated it, the scare the former causes and the loss of appetite that ensued from the latter, has a silver lining, I guess. 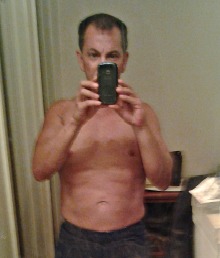 In the meantime I just got another threatening email from my employer demanding I run around to several docs, all of whom are busy and hard to get an appointment with much less to stop and fill out obscure forms, and return them to that same employer — not my insurance company, my employer — or I get fired. That deadline has already passed as the email in question was routed to spam and was sent while I was flat on my back a couple of weeks ago.

I sent an email plea to the director of my contact center, but my guess is I’m already toast. Which means I’m now cut off from my insurance right in the middle of this shit. That means no more disability — that I signed up for and paid for — and only Cobra for the rest of the year. I live in Texas so unemployment is minimal, they delay it in every way they can and make it hard as possible to even get, and there is no such thing as a safety net or Medicaid for adults like me in this very Red State.

I could really use any spare cash readers might have in their paypal accounts. If it gets bad, and it probably will get worse financially, much worse, I’ll have to get some kind of snail mail address for others to use who don’t have paypal.

Cassini delivers again: Saturn » « It’s beginning to look a lot like the war on Christmas