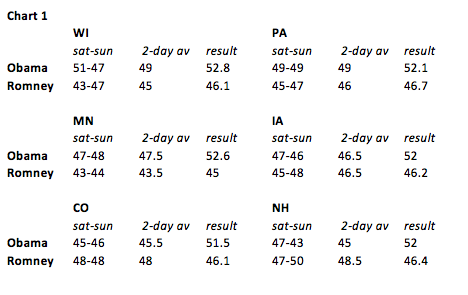 New Republic has a fascinating look at Romney’s internal polling numbers, or rather how wrong they were. For example, the internal polls showed Romney tied in Iowa and ahead by several points in Colorado and New Hampshire. Romney ended up losing all three states by a little over five points. Almost ten points off for CO and NH, that’s a huge miss.

The numbers include internal polls conducted on Saturday, November 3, and Sunday, November 4, for Wisconsin, Pennsylvania, Minnesota, Iowa, Colorado, and New Hampshire. According to Newhouse, the campaign polled daily, then combined the results into two-day averages. The numbers for each day along with the averages are displayed in the chart below, followed by the actual result in each state. (See image above — DS)

Clearly Romney’s pollsters made false assumptions about the make up of the electorate that turned out. But what was the cause? What the hell went so wrong here?

When big things happen, whether it’s in nature or culture, there’s often more than one factor involved. We’ll probably never know for sure, but seeing as how Nate Silver did get it right using data from non partisan public polls, we can make some inferences and take a few guesses. Hurricane Sandy may have sobered up the electorate about the role of government, GOP pols pontificating on rape didn’t help, Romney’s 47% comment was poison. There’s no doubt that more young people turned out than Team Romney predicted. Same for minorities and women and voters concerned with marriage equality. It’s clear that Team Obama was hugely successful in turning their voters out. But that still doesn’t explain why almost everyone but a few GOP pollsters –internal pollsters who you would think want to get it right — were so off.

I can also think of less honorable reasons why the GOP screwed up. They might have tried to factor in expected voter suppression, or they may have misjudged the effect of bullying and lying about the President for the last four years on the preogressive base. On the latter, I can tell you that every time the right dog-whistled “nigger,” or lied about Obama’s birth place or religion or what have you, it pissed me and a whole bunch of people like me off in a visceral way.

As long as we’re guessing, here’s my wildest guess: there’s an enormous number of grifters preying on wingnuts these days. It’s a huge industry. They operate openly for the most part because, in most rightwing circles, any quasi-legal scheme to shameless enrich one’s self by exploiting anyone else, even the wingnut base, isn’t frowned upon, it is applauded. Maybe here and there Romney’s pollsters figured to themselves, ‘fuck it, let’s take this rich SOB for everything he’s got while the gettin’s good, let’s just tell him what he wants to hear and make bank.’

That’s pure, wild speculation on my part, no way to ever know, but a boy can dream.

The most wonderful and humiliating time of the year » « Sex crazed demons are stealing your virtue!