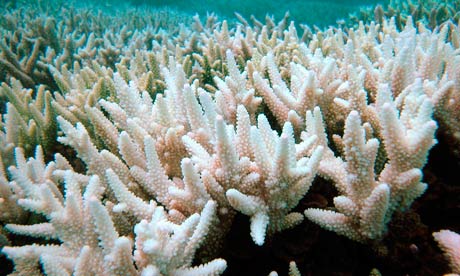 Bleached coral at the Keppel Islands on the southern Great Barrier Reef in Queensland, Australia. Image courtesy of Reuters/UK Guardian

Just in case you lucky duckies down under feel left out of the incredible shrinking Arctic ice cap adventure, you have an exquisite shrinking biome to call your own. A new analysis indicates that roughly half the coral in the Great Barrier Reef off the coast of Australia has gone the way of the Dodo bird, and it did so in less than 30 years.

UK Guardian— Coral cover in the Great Barrier Reef has dropped by more than half over the last 27 years, according to scientists, a result of increased storms, bleaching and predation by population explosions of a starfish which sucks away the coral’s nutrients. At present rates of decline, the coral cover will halve again within a decade, though scientists said the reef could recover if the crown-of-thorns starfish can be brought under control and, longer term, global carbon dioxide emissions are reduced.

“This latest study provides compelling evidence that the cumulative impacts of storms, crown-of-thorns starfish (Cots) and two bleaching events have had a devastating effect on the reef over the last three decades,” said John Gunn, chief executive of the Australian Institute of Marine Science.

Since the odds of getting climate change under control in this century are essentially zero, the reef will cease to exist. At the present rates of decline it will transform into a vast undersea rain forest into isolated pockets providing only a glimpse of its former glory for future tourists and scientists to study. The rest of it will be crumbling white skeletons of the once mighty Cnidarian jungle. And that’s probably a good case scenario.