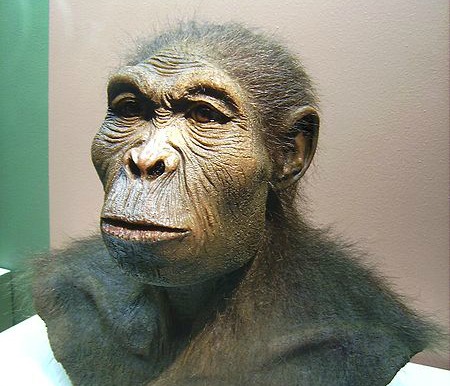 Reconstruction of Homo habilis at the Westfälisches Museum für Archäologie, Herne, courtesy of the Wikipedia.

At one time the proposed hominid line taught to new anthropology students was pretty simple. It went something like Australopithicus to Homo habilis, habilis to H. erectus, erectus to us. This was debated, but it was a basic view the fossil evidence supported.

It’s more complicated now, that tree is bushy, but the good news is some details have been filled in. One of the details is or was Homo rudolfensis, henceforth called Rudy here, a proposed subspecies that lived about 2 MYA. But Rudy was only represented by a handful of teeth, bone scraps, and one beautifully preserved, fairly complete skull dubbed KNM-ER 1470 found by none other than Richard and Meave Leakey at Koobo Fora, Kenya, in 1972. That may have changed this week:

BBC News— The finds back the view that a skull found in 1972 is of a separate species of human, known as Homo rudolfensis. The skull was markedly different to any others from that time. It had a relatively large brain and long flat face. But for 40 years the skull was the only example of the creature and so it was impossible to say for sure whether the individual was an unusual specimen or a member of a new species.With the discovery of the three new fossils researchers can say with more certainty that H.rudolfensis really was a separate type of human that existed around two million years ago alongside other species of humans.

That’s exciting! All human and primate origins are fascinating both in themselves and because they’re related to us. But this one is even more exciting, it’s an excellent teaching opportunity and introduction, for you awesome budding anthropology students and anthro buffs, for two hugely productive schools of thought in anthropology and zoology in general, splitters and lumpers.

Lumpers might argue Rudy is just an early H. hab or particular kind of late model Australo. Splitters might argue Rudy is a full-blown specific species on its own. There’s no right or wrong group, both have made predictions that have been confirmed by subsequent research, they each drive science in a positive way by providing healthy skepticism, they each push someone making claims about a lump call or a split call to be as rigorous as possible to wave off that healthy criticism. It’s science, real science, with real skepticism and real debates — not that bullshit contrived conservative nonsense we are forced to spend time and resources keeping at bay — over the most fascinating questions we can conceive.

With the new material, splitters who saw in that one sample some of the predicted suite of features that might fit nicely between earlier hominids, such as A. africanus or A. farensis (Lucy), and later hominids like as H. habilis and H. ergaster that are more firmly associated with the ancestral line leading to anatomically modern humans. Bear in mind, if you read about it elsewhere, you know the term that will probably be used. For what’s it’s worth, Rudy wasn’t missing, we knew about his possible existence thanks to ER 1470 and had already bene debating its meaning for some time. This suggests Rudy really could be a link though, between two better established hominid taxons, both of which lead to us.

Update on the spider bites » « It’s a healthcare scandal!