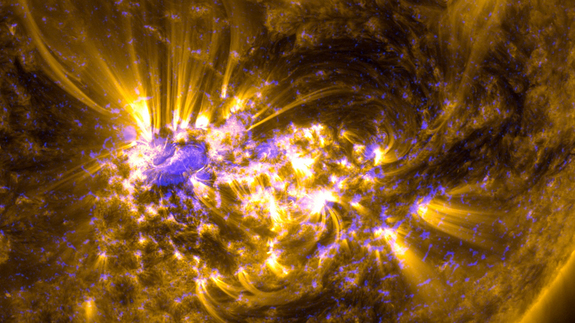 The sun emitted a powerful set of X-class flares this week, one of which could start hitting earth’s magnetosphere right about … now. The other could strike a few days later. The effects are notoriously hard to predict, but scientists now say it does not poses a serious threat to the surface:

MSNBC — Earlier forecasts had hinted that this weekend’s light shows could reach as far south as Alabama. But further number-crunching scaled back the estimates of the coming geomagnetic storm’s severity, Young said, suggesting a more limited auroral reach. “I am disappointed that I probably won’t see any in Maryland,” Young said.

Those in the northernmost regions of the US and throughout Canada and Siberia may notice heightened Auroras beginning as soon as early Saturday morning.  There could be some issues with GPS and other satellite communications.

The fear is one day, one of these coronal mass ejections will smack right into us and cause something like the Carrington super storm of of 1859. If a solar storm of that magnitude hit the earth today, it could shut down the word wide web and lay waste to power and phone lines all over the planet. Damage could be in the trillions. It’s just a matter of time: analysis of nitrates in Greenland ice cores indicate such an event occurs once every 500 years, on average.