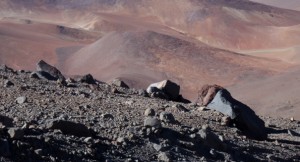 Scientists have discovered a group of microbes that might be able to flourish on Mars. The critters, archaea to be precise, were found on the rocky slope of a volcano in an inhospitable region of South America and they’re genetically distinct from most other known microbes:

(More) –“We haven’t formally identified or characterized the species,” said Ryan Lynch, a microbiologist with the University of Colorado in Boulder who is one of the finders of the organisms, “but these are very different than anything else that has been cultured. Genetically, they’re at least 5 percent different than anything else in the [DNA] database of 2.5 million sequences.” The database represents a close-to comprehensive collection of microbes, he added, and researchers worldwide add to it as they publish papers about the organisms.

How different I wonder? Is it possible Martians have been living here the whole time, or could those interesting colors in some of the Martian (And European ice!) surface images be little microbes painting it green or orange, all along? Well, that’s probably a stretch.