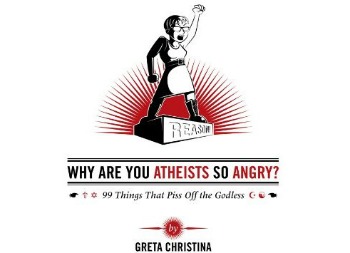 Well, I’m not an angry atheist, in fact I’m positively cheerful, especially given my future fate as hot coal in hell –{rimshot!}. But fellow FTBer Greta Christina has a book out by the same name, and thanks to the good godless folks at Dirty Heathen Publishing , you can have it on your Kindle in two shakes right here:

This accessible, personal, down-to-earth book speaks not only to atheists, but to believers who want to understand the so-called “new atheism.” “Why Are You Atheists So Angry?” drops a bombshell on the destructive force of religious faith — and gives a voice to millions of angry atheists.

The Goldilocks zone and fairy tale earth » « Can companies deduct political contributions in the wake of Citizens United?