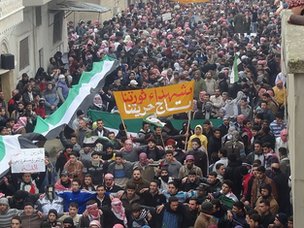 Tens of thousands of protestors reportedly took to the streets a big number and larger problem for a small nation like Syria. The number of protestors arrested or killed is hard to say, this is a tightly controlled, closed country. But it may not be for long:

(BBC) — The London-based Syrian Observatory for Human Rights said as many as 250,000 people had taken to the streets in the north-western province of Idlib. One report later said security forces had opened fire on a protest in the city of Idlib, killing several people. “This Friday is different from any other. It is a transformative step. People are eager to reach the monitors and tell them about their suffering,” Abu Hisham, an activist in Hama, told the Reuters news agency.

Analysts debate what might follow if the current regime falls. But one thing is clear: repression and violence has not fared nearly as well throughout the Arab Spring movement as it once did. After what happened in Libya you’d think a rational person would be looking for a way out. And Assad likely has a way out, like his cohorts, the man is almost certainly loaded to bear with wealth, some of it probably stashed in foreign banks. Enough to keep him, his family, and his friends in the lap of luxury for the rest of their days. What is it that keeps these numbskulls hanging on to power for dear life, damn the risk or consequences, when they could easily retire in peace and prosperity to the sound of applause from the entire world?