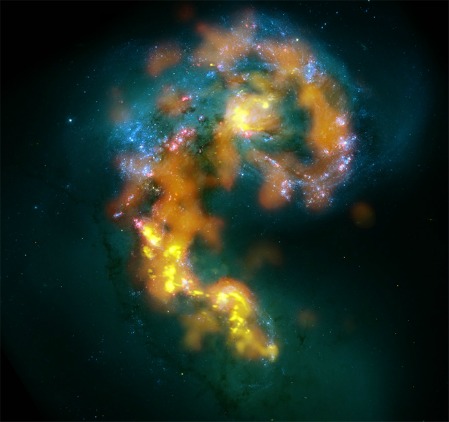 Chile’s Atacoma Desert is rapidly becoming THE place for optical astronomy. The combination of altitude, bone dry conditions, and clear skies make it arguably the best location on earth for telescopes. Now the site also features an array of radio telescopes under construction and some of the first images coming in reveal the inner workings of one of the most interesting galactic scenes in the nearby cosmos: 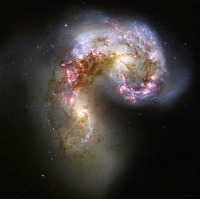 The Antennae Galaxy in visible as revealed by Hubble

The new images reveal a flurry of star formation within thick clouds of gas and dust at the Antennae Galaxies’ impact zone, 45 million light-years away. Older star-forming regions appear as a faint orange in the image while the youngest — some 3 to 4 million years old — glow bright yellow.

The Antennae Galaxy is really two spiral galaxies in the midst of a collision lasting hundreds of millions of years. The space between individual stars is so vast that they rarely collide. But the clouds of dust and gas in each galaxy slam into one another at high speeds, sometimes in the neighborhood of a 100 miles a second. Even extremely diffuse matter heats up under those conditions, hot enough to emit microwaves in some cases, and giant shock waves echo back and forth, ringing the galaxies like a bell. In the compactions produced by the passing shock waves globs collapse to form stellar nurseries and a burst of star formation occurs deep inside pockets of dust and gas.

That’s where the Atacoma Large Millimeter/submillimeter Array (ALMA) comes in. Visible starlight from the baby stars can’t penetrate the layer of dust and gas, but invisible light in the lower portion of the spectrum can and that’s ALMA detects. The array is not even half-finished, but already the resolution is uncanny. Not bad for a test run!