The sentiment “Whom the gods would destroy they first make mad” has ancient roots but was perhaps most famously found in the poem The Masque of Pandora written in 1875 by Henry Wadsworth Longfellow, who put these words into the mouth of Prometheus. How I interpret it is that if you make people mad, they will destroy themselves, saving you the bother of doing so.

I was thinking about these words while pondering the actions of three people: Elon Musk, Mark Zuckerberg, and Donald Trump since all three seem to be on the path of self-destruction. I am not implying that they are mad but they do seem, on the basis of past success, to suffer from an irrational overweening confidence in their own powers, and this has led to rash decisions that threaten to bring them down.

In the case of Musk, it was his ill-fated announcement on April 14 that he would buy Twitter and take it private. His offer put Twitter at a valuation of $43 billion that observers said was much too high. On May 6, he tells potential investors that he plans to quintuple Twitter’s earnings to $26.4 billion by 2028, something that was seen as wildly unrealistic. On May 13, having second thought about his purchase, Musk says that the deal in temporarily on hold and on July 8 moves to terminate the deal. He is then sued by Twitter and on October 28, the day before the case is due to go to trial, he agrees to buy Twitter after all at the earlier price. (See the full timeline of events of this fiasco here.)

While he was doing all this, his other company Tesla’s stock price was tanking. 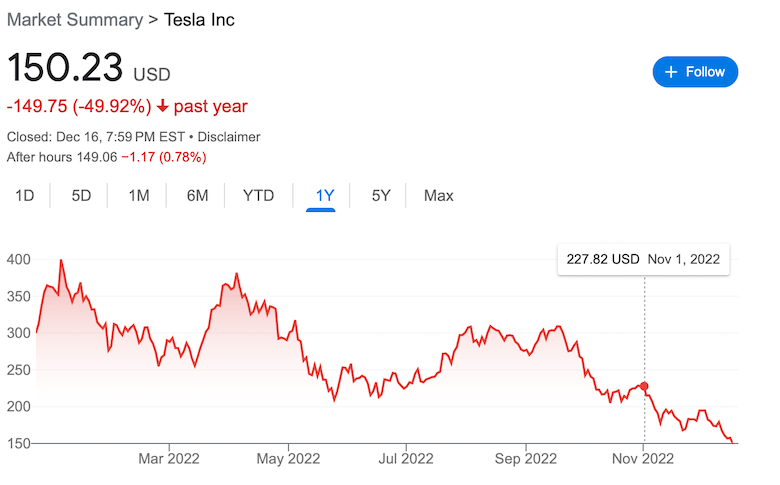 Needless to say, Tesla’s other shareholders are not happy, feeling that Musk is ignoring this company because of his obsession with his new Twitter toy, leading to calls for him to step down as Tesla CEO. Musk then issues yet another silly poll asking people to vote on whether he should step down as Twitter CEO and hand over the running of Twitter to someone else. He said that he would abide by the result. Of course being the sole owner, he would still call the shots whoever he should appoint as CEO. I suspect he had mixed feelings about this vote. If the vote was ‘yes’, then it can be a face-saving way to get out of the quicksand that he finds himself in. But at the same time being asked to leave would be a blow to his massive ego. The final vote had 57.5% saying he should leave. Since then, he has not said what he is going to do.

Meanwhile, Mark Zuckerberg is having similar problems with Meta. In his case, his obsession with what he calls the Metaverse, the virtual reality world he is creating that he thinks we will all want to inhabit at some point, has landed with a thud and has created huge costs for the company. Its stock price has dropped from a high of 379 in September of last year to less than one-third of that value now at 119, an even steeper drop than Tesla’s. The stock dropped by 86 points between February 1 and 3 alone. 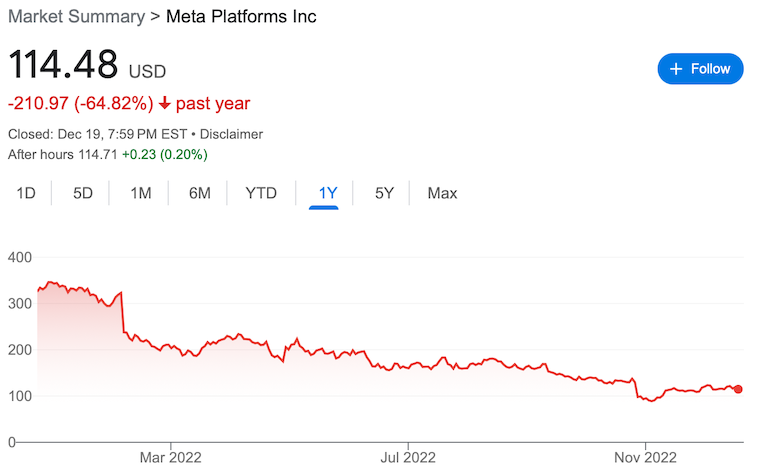 And then we have Donald Trump. His success in winning the presidency seems to have created in his mind the idea that he cannot lose and those grandiose fantasies have manifested themselves in increasingly bizarre ways, particularly since he lost the 2020 election. He seems to be on a self-destructive course, ranting and raving and, among other things, meeting with white supremacists, neo-Nazis, and anti-Semites. Such an event would be a career killer for most politicians seeking elections but Trump keeps going on, buttressed by the sense that his devoted fans will never desert him.