I am curious as to what is going to happen to the QAnon movement now. As readers know, these are people who think that there is someone at the top levels of government with high-level security clearance (possibly Donald Trump himself) who uses the pseudonym Q to drop hints as to what is going on behind the scenes. As a result, QAnon followers believe that the top echelons of the Democratic party consist of pedophiles, sex-traffickers, and even those who eat children and that Trump has a plan to flush out and arrest them in a spectacular denouement. They have been eagerly waiting for this moment. And waiting. And waiting. But like Godot (or perhaps more appropriately, Guffman), Q has so far not revealed themselves and the prediction have so far failed to materialize.

If Trump is to expose this ring of nefarious characters, he surely must do so before leaving office on January 20, while he still has the full power of the government’s legal machinery to arrest and charge them. And yet, it appears that Q has gone dark since the election, offering no comfort to Trump’s followers as they suffer through the agonizing defeat of their cult leader.

Now seems like the perfect time for the “Q” behind the QAnon conspiracy theory – a supposed government insider feeding gibberish to a huge internet audience – to speak out.

But, alas, Q is nowhere to be found: The anonymous message board guru’s last post was nearly a week ago, hours before polls opened on Nov. 3. Q quoted the closing line from Abraham Lincoln’s “Gettysburg Address” and posted, of all things, a link to the soundtrack from the film “The Last Of The Mohicans.”

Those things will not sway the true believers because a mantra commonly used by them that comes from Q is “do your research”, which they take to mean that all these supposed non sequiturs have meaning that become clear if you investigate them thoroughly. I am pretty certain that circulating among QAnoners are decryptions of those things. They will remain loyal to Q.

As observers of the movement have noted, the media projections for Biden have thus far done little to sway QAnoners’ belief that Trump will in fact serve a second term in office.

“Another day of ‘Trump actually won a landslide and is only pretending he lost to expose the deep state’ dawns from the Q community,” conspiracy theory researcher Mike Rothschild noted on Twitter Sunday, pointing to various message board examples of Q-flavored denialism.

You can never really debunk a conspiracy theory as long as people want to continue to believe in it. They can always find a way to explain away contradictory facts. But I am curious as to what QAnon followers will come up with on January 20th when Trump finally has to leave the Whire House.

But time is running out for Q and Trump to make their move even before January 20. Various deadlines in the election process are approaching. Normally, no one other than election geeks pays any attention at all to these milestones but this year they take on some significance because as each one is passed, it becomes harder for Trump and his supporters to hope for any reversal of the results. Here they are.

8 December: this is the deadline for resolving election disputes at the state level. All state recounts and court contests over presidential election results are to be completed by this date.

14 December: electors vote by paper ballot in their respective state capitols and also in the District of Columbia, which while it is the seat of the US government, is not actually a state. Thirty-three states and DC have laws or party regulations requiring electors to vote the same way the popular vote goes in the state. In some states, electors can even be replaced or subjected to penalties if they do not toe the line. An elector who doesn’t vote according to who won the popular vote is known as a “faithless elector”. The votes for president and vice-president are counted and the electors sign six “certificates of the vote”. The certificates, along with other official papers, are sent by registered mail to various officials, including the president of the Senate.

23 December: the certificates must be delivered to the designated officials.

6 January 2021: the House and Senate hold a joint session to count the electoral votes. If one ticket has received 270 or more electoral votes, the president of the Senate, currently vice-president Mike Pence, announces the results.

I am looking forward to the last one, to see Pence, the ultimate yes man toady, have to announce publicly that his boss has lost. If Trump is still in denial and clinging on, what will Pence do? And what will Trump do to Pence?

Tom Tomorrow looks at all the delusional thinking that emanates from the White House. 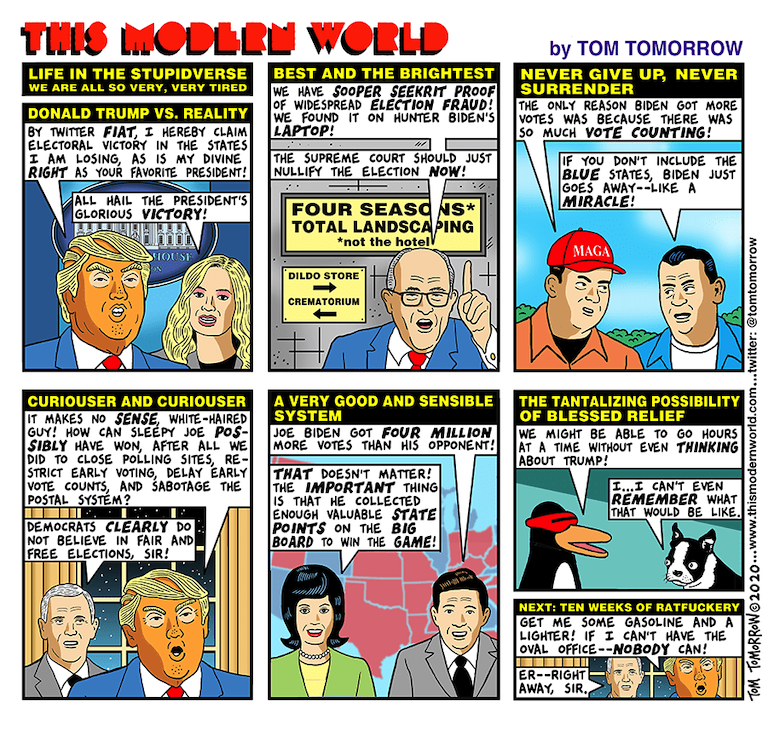 Jen Sorensen looks at the likely response one will get if one tries to reach out to members of the Trump cult. 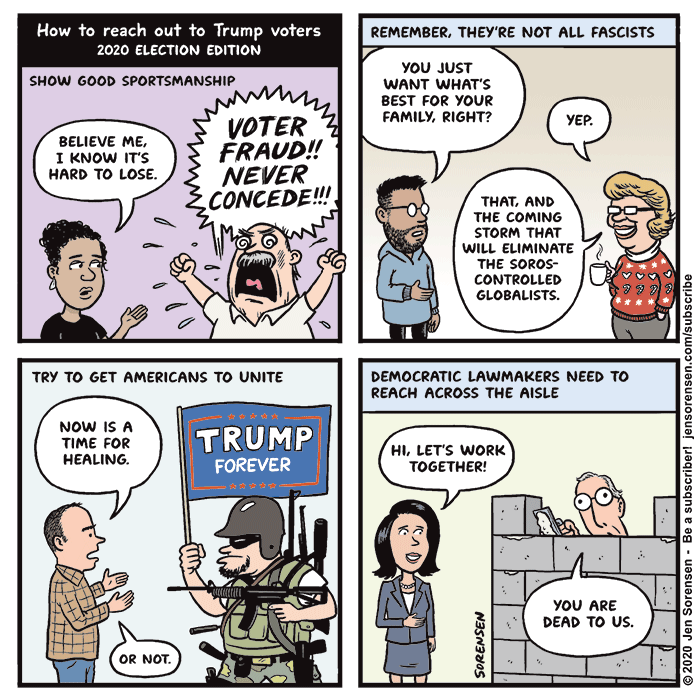