Trump and his allies are digging in their heels, claiming that their investigations will prove that there was massive fraud and the election was stolen from them.They are refusing to concede, even though late last night the other news outlets joined AP and Fox in calling Arizona for Joe Biden, confirming his total of 290 EVs. AP and Fox had called it as early as the night of the election but the other news outlets held back, giving the Trump camp a slim hope that they could retain a state that had long been considered reliably Republican. Now not only has Biden won it, but its two senators are also Democrats.

This means that challenging just Pennsylvania’s 20 EVs is no longer enough for Trump. He needs another state as well. If Joe Biden keeps his lead in Georgia and wins it and Trump wins North Carolina as expected, the final margin for Biden will be 306-232, exactly the same as when Trump beat Hillary Clinton in 2016, a margin that Trump claimed back then as a massive victory for him. [UPDATE: Most news outlets have finally called these two states as predicted. The AP is still holding off on Georgia. The fat lady is reaching the last notes.]

In an interview with Fox News host Chris Wallace in Dec. 2016, Trump dismissed a question about Russian interference in the election by boasting “we had a massive landslide victory, as you know, in the electoral college, I guess the final number is 306 and [Clinton] is down to a very low number.”

This time, Biden’s margin of victory in the popular vote is already over 5.3 million and growing, almost twice the margin that Clinton had.

Trump is learning from bitter experience the lesson that what goes around, comes around.

Seth Meyers looks back on all the past occasions when Trump has claimed to be investigating fraud and that the truth would be revealed soon, only of course they were all lies. Not only were there no frauds, there were not even investigations.

Meyers also goes through the claims of fraud made by Trump and his acolytes and shows how ridiculous they are.

Trump has given phone interviews to two friendly journalists where he lays out what he thinks is a winning strategy. We are dealing with true dead-enders who will continue to deny reality until it slaps them upside the head.

This meme that I got from a friend in Sri Lanka pretty much says it all. 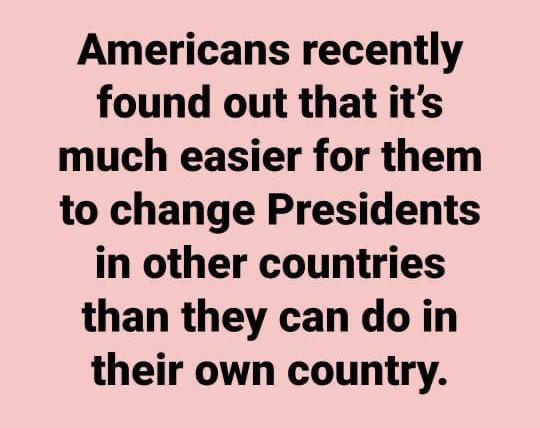 Entitled no more? » « Time is rapidly running out for Q and QAnon and Trump