Sometimes the stupidity of some people just amazes me. Take this tragic case of a 30-year old man who was killed because he was riding his e-scooter on an expressway in France. These vehicles are just motorized versions of the scooters we used to play with as children where you had to propel yourself forward by pushing on the ground with your legs. I have not seen them on the streets in the US but they seem to be popular in Europe. 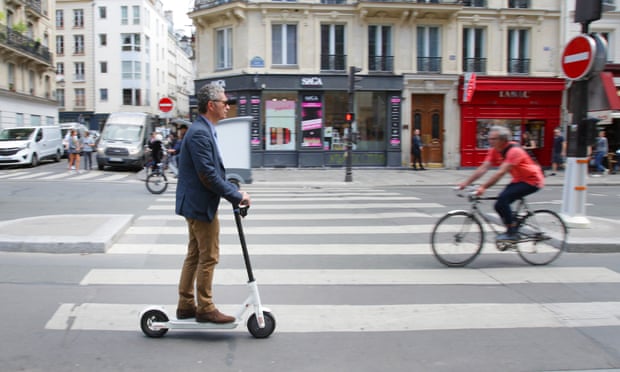 The details that I have highlighted are just appalling.

A 30-year-old man has been killed after being hit by a motorbike while riding his e-scooter on a French motorway.
…

The accident happened around midnight on Friday on the A86 at Velizy-Villacoublay, 4km from Versailles to the south-west of central Paris.

The scooter rider was not wearing a helmet and was reportedly travelling in the fast lane when the motorbike hit him from behind. Initial police reports said it was not clear if the scooter had lights.

The problem is that these things are dangerous for the users when they are on the streets but become dangerous to pedestrians when they travel on sidewalks (what we in the US call pavements) and so it is not clear what should be done about them.

A 25-year-old man was killed after being hit by a lorry in a northern district of Paris in June, the first fatal accident involving an e-scooter in the French capital. An 81-year-old man died after he was reportedly knocked over by an e-scooter in Levallois-Perret, a Parisian suburb, in April.

In the UK, the TV presenter and YouTube star Emily Hartridge was killed when her e-scooter collided with a lorry at a roundabout in Battersea, south-west London, in July.

In some respects, e-scooters are like bicycles and so should be regulated like them but they strike me as being much less visible to cars and much more vulnerable than cyclists.