The radio program On The Media had a fascinating episode on money: what it is, how it came to be, why it has value, and what its purpose is. It started with a story of someone I had not heard of before, an artist named J. S. G. Boggs, who made detailed drawings of currency notes with some slight imperfections deliberately inserted, and then exchanged those notes for goods with people who accepted them at face value as a work of art and even gave him change in regular currency, knowing that they were not notes issued by the government.

His drawings of currency, depicting only a single side of the note, came to be known as “Boggs notes”. Boggs notes were both art objects and part of a performance. Boggs would exchange the notes only for their face value: when he drew a $100 bill, he exchanged it for $100 worth of goods. He then sold any change he received, the receipt, and sometimes the goods he purchased as his “artwork”, typically to art dealers and collectors. Boggs would tell a collector where he spent the note and the details of the transaction, but he did not sell the notes into the art market directly. The buyer would then track down the person in possession of the note in order to purchase it. Boggs noted that after the initial transaction the notes would be resold for much more than their face value, with one Boggs note reportedly being resold for $420,000.

As host Bob Garfield says, the Boggs experience gets about as close as one can to understanding what money is, that it has no intrinsic value and its value depends entirely upon the value others were willing to give it.

The program goes on to discuss the origins and history of money. Unlike what is commonly thought, money did not originate as natural progression and improvement on the earlier bartering system that worked best when there was a fortuitous match between the needs of the owner of one set of goods with that of the owner of another set of goods, which rarely happened. Instead, the origins of money lay in a system that originated in early Mesopotamia in the form of a ledger that kept a record of the transactions among the people who began to live and interact in ever-growing communities.

Oddly enough, modern day cryptocurrencies work pretty much on the same principle. The underlying blockchain technology is essentially a vast ledger that records transactions between people that are stored on multiple computers and are visible by all, thus ensuring that the record is accurate.

I was also fascinated by the money found on the tiny island of Yap in the Pacific Ocean that consists of giant stone discs. 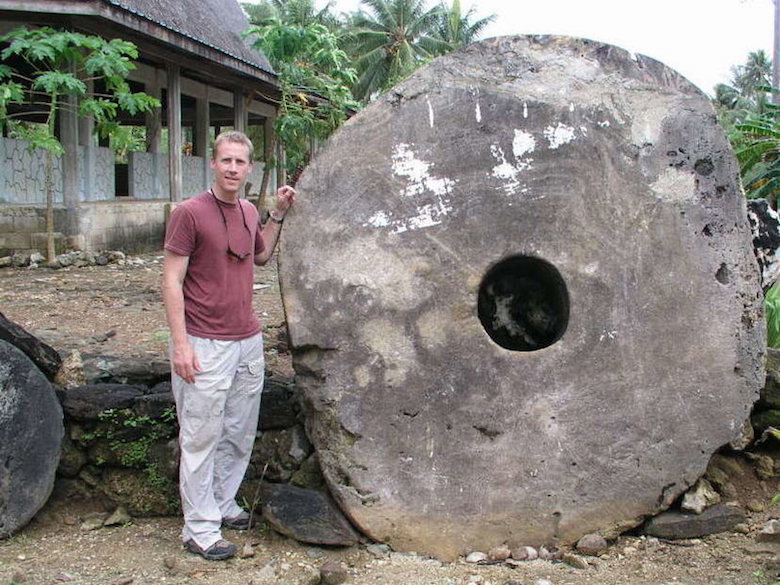 There’s no gold or silver on Yap. But hundreds of years ago, explorers from Yap found limestone deposits on an island hundreds of miles away. And they carved this limestone into huge stone discs, which they brought back across the sea on their small bamboo boats.
…

One key thing about this money: It was really heavy. A big piece could weigh more than a car.
As a result, this very concrete form of money quickly made the jump to being something very abstract.

“They often talk about the stones themselves not changing hands at all,” Fitzpatrick says. “In fact, most of the time they wouldn’t.”

So imagine there’s this great big stone disc sitting in a village. One person gives it to another person. But the stone doesn’t move. It’s just that everybody in the village knows the stone now has a new owner.

In fact, the stone doesn’t even need to be on the island to count as money.

One time, according to the island’s oral tradition, a work crew was bringing was bringing a giant stone coin back to yap on a boat. And just before they got back to the island, they hit a big storm. The stone wound up on the bottom of the ocean.

The crew made it back to the island and told everybody what happened. And everybody decided that the piece of stone money was still good — even though it was on the bottom of the ocean.

“So somebody today owns this piece of stone money, even though nobody’s seen it for over 100 years or more,” Fitzgerald says.

This system, in the end, feels really familiar. If you go online to pay your electric bill, what’s really changing in the world?

In other words, that stone money on the bottom of the ocean that you used to own now belongs to the power company.

Incidentally, Donald Trump has nominated someone to the Federal Reserve who wants the US to go back on the gold standard where the value of the currency has a fixed value in relation to an amount of gold and the government cannot print more money than it has in gold stored in its vaults. Richard Nixon formally abandoned it in 1971, but even back in 1933, president Franklin Delano Roosevelt suspended the gold standard so that the government could spend more money to get the country out of the Great Depression.

Jeffrey Epstein may be in more trouble than we thought » « Where does Jimmy live?