Cartoonist Scott Adams, creator of the comic strip Dilbert, is a climate change skeptic who repeats the well-worn anti-science tropes of that community. Usually he attacks the credibility of the climate change models that are used to predict the scale of climate change and the potential consequences. But in this cartoon, he goes further and seems to be attacking the whole idea of random statistical sampling. 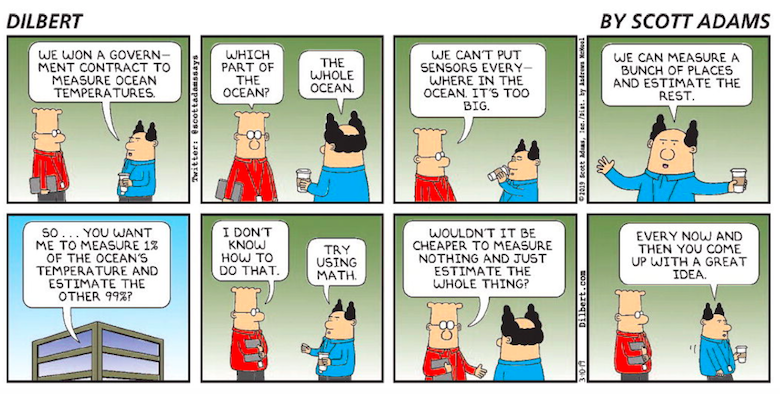 The main character Dilbert is supposed to be a nerdy engineer who has to suffer the fools who are his co-workers and bosses. Presumably he is Adams’s alter ego. An engineer is unlikely to say something like this since the entire discipline is based on using sampling techniques to estimate the likelihood of outcomes. In fact, this cartoon would make some sense if the dialogue between the pointy-haired boss and Dilbert was switched, since the boss is the person who is ignorant of basic science, engineering, and even logic.

Adams’s educational background is in economics and management, not engineering. But economics, like most disciplines, also uses sampling because it is an invaluable tool of research, so there really is no excuse for this cartoon other than as serving Adams’s crusade against climate change research.

Remarkable resilience of a dog » « Child marriage in the US