I don’t normally read Dilbert — I’ve seen far too much of the benighted ignorant psyche of its creator — but this one was just laid out on a table at the coffee shop yesterday, and I knew I’d have to deal with it. In this one, Dilbert goes full climate science denialist. This might be fun, to dissect Dilbert, because even though it will kill what little humor is present in it, at least we’ll have a good time laughing at Scott Adams. Let’s dissect the shit out of this thing.

OK, this is sort of fine. I think it’s a good idea for companies to think about what impact climate change will have on them, and how they affect the environment. I’m at a green university, and we’ve had these sorts of discussions. Still do, all the time.

It is definitely true that human activity is warming the Earth. It will lead to a global catastrophe, depending on how you define catastrophe: it will cause acute economic disruption, resource wars, and the death of millions. Is that catastrophic enough for you?

By the way, I notice that the scientist is a goateed and balding white man in a lab coat. It’s either unconscious bias (that’s how scientists are supposed to look!), or, I can’t help but notice a weak resemblance to Michael Mann. 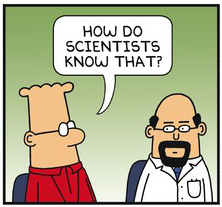 On the face of it, yes, that is a good question. I’d encourage students to ask that every time an instructor told them something. But consider the context. The answer to that question is readily available — google it. You can read the papers. You should have the answer to that from your high school earth science class. So why is Dilbert being made to ask this trivial question right at the start of this meeting? I can tell right away that this is not a sincere question, this is a derailing tactic to justify a software engineer speaking out of his ass to the scientific expert. Sound familiar?

Then we get the eternal dilemma of the science popularizer. Do you just scorch this ass with contempt because you can see right through him, or do you try to take the question seriously and give the primer in kindergarten climatology he’s asking for?

You can’t win, you know. The game is rigged. If you do the former, you’ll be accused of being hostile and mean. If you do the latter, you’re patronizing and people will write scornful blog posts about how you think raw data dumps will cure all the scientific misunderstandings in the world.

So what do you do? Most of us will take the generous view and try to explain exactly what the questioner is asking for, like our Michael Mann surrogate here: 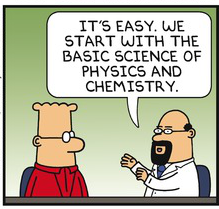 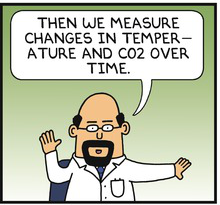 And that’s also fine. So far, the strip has been true to the characters, and the nature of their interactions. It’s denialist vs. scientist, familiar territory, and now it’s time for the funny, clever twist…but Adams can’t deliver. He has to resort to sticking words in the mouth of the scientist that are not at all true to the character.

That’s just wrong. It’s not what climate scientists say or even think. It’s what Scott Adams, who is no scientist of any kind, says and thinks. And with that betrayal of the premise of the joke, it abruptly falls flat and dies. If all you can do to discredit a point of view is to lie and make puppets say falsehoods, it’s your position that fails. Adams does this because he lacks any insightful response to the honest arguments of scientists.

I guess there’s supposed to be a punchline of some sort next. Once again, Adams fails to meet the minimal standards of his medium. 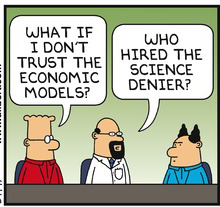 I think the punchline is supposed to be implying that science supporters can only defend their position by calling True Skeptics mean names. Of course, the entire point of the two panels just above that is to call climate scientists conscious liars.

The only people who will find this at all funny are the denialists who see the panels in which the climate scientist openly maligns his methodology as affirmations of their beliefs. That’s OK, it’ll finally be the death of Dilbert — I skimmed the comments and noticed several people were shocked that Scott Adams endorse an anti-scientific claim. Apparently they’ve never read his blog before.

And people think tenured professors have it easy.

Those rocks belong to everyone » « Creationists need better evidence than that