I have never been audited by the IRS. Many people fear getting audited because even if you have done nothing wrong, you might get tripped up by the complexity of the tax laws and make a mistake and an audit reportedly requires you to produce all manner of supporting documentation. You would think that the people who are most likely to get audited are the very wealthy who are in a position to deprive the government of large amounts of revenue by all manner of devious practices, because even though the tax system favors the rich, they still want to avoid paying even what the tax laws rightfully requires.

You would be wrong because this is the US where the rich get favor upon favor piled on them. Over time, the Republicans have successfully cut the IRS budget so that not only are its services to the general public (such as help desks) drastically reduced, but the number of audits they carry out has also declined. But even worse, as this ProPublica reports says, the IRS is increasingly targeting for auditing low-income people more than the very rich. It especially targets people who claim the Earned Income Tax Credit, the program aimed at helping the working poor by giving them supplemental income.

Budget cuts have crippled the IRS over the past eight years. Enforcement staff has dropped by a third. But while the number of audits has fallen across the board, the impact has been different for the rich and poor. For wealthy taxpayers, the story has been rosy: Not only has the audit rate been cut in half, but audits now tend to be less thorough.

It’s a different story for people who receive the EITC: The audit rate has fallen less steeply and the experience of being audited has become more punishing. Because of a 2015 law, EITC recipients are now more likely to have their refund held, something that can be calamitous for someone living month-to-month.
…

Generally, the more money you make, the more likely you are to be audited. EITC recipients, whose typical annual income is under $20,000, have long been the major exception. That’s because many people claim the credit in error, and, under consistent pressure from Republicans in Congress to curtail those overpayments, the IRS has kept the audit rate higher. Meanwhile, there hasn’t been similar pressure to address more costly problem areas, like tax evasion by business owners.
…

In 2017, EITC recipients were audited at twice the rate of taxpayers with income between $200,000 and $500,000. Only households with income above $1 million were examined at significantly higher rates.

Put another way, as the IRS has dwindled in size and capability, audits of the poor have accounted for more of what it does. 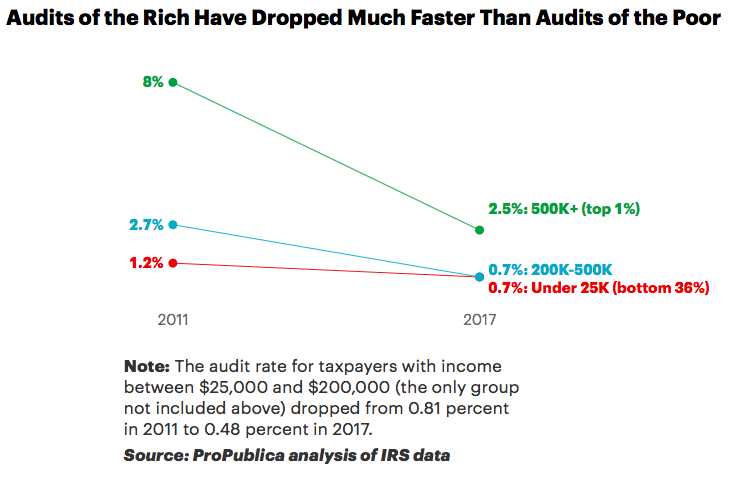 Humphreys County in Mississippi is one of the poorest counties in the nation, with a median annual household income of $26,000, yet it has the highest audit rates in the country, 51% higher than Loudon county in Virginia which has the highest median income of $130,000.

The five counties with the highest audit rates are all predominantly African American, rural counties in the Deep South. The audit rate is also very high in South Texas’ largely Hispanic counties and in counties with Native American reservations, such as in South Dakota. Primarily poor, white counties, such as those in eastern Kentucky in Appalachia, also have elevated audit rates.

The states with the lowest audit rates tend to be home to middle income, largely white populations: places like New Hampshire, Wisconsin and Minnesota. Generally, the IRS audits taxpayers with household income between $50,000 and $100,000 the least.

When we came to the US in 1983, we arrived at the end of September. When we filed our taxes next year, our income qualified for the EITC but I did not claim it, reasoning that although I was technically entitled to do so because of our low income, the EITC was designed for people who were reporting their income for the full year whereas mine was low because it was for just three months. But when I got my refund, some kindly person at the IRS must have thought I was ignorant of this benefit and added it to my refund. I doubt that would happen now.