The meeting of senator Diane Feinstein where she spoke dismissively and condescendingly to a group of children and their parents who were urging her to sign on to the Green New Deal has reverberated widely, having been viewed more than nine million times. As Aida Chavez and Ryan Grim report, the exchange has had a big impact, forcing Feinstein to change her mind.

In her now-infamous response to the Sunrise activists, Feinstein said she was in the process of drafting her own, more moderate resolution on confronting climate change that she felt would have a better chance of passing in the GOP-run Senate. The viral Twitter clip, which has racked up more than 9 million views, was the first time many people had heard of Feinstein’s alternative resolution, and when climate activists learned about it, they went into overdrive to stop it. Feinstein, facing pressure, this week elected to shelve it.

As they report, what Feinstein had been planning is an old strategy but this time it didn’t work.

WHEN HOPING TO stop a bold piece of legislation that has broad public support, one of the oldest moves on the Senate floor is to introduce a different version that is claimed to be just as good, but more reasonable. “I’ve been in the Senate for a quarter of a century, and I know what can pass, and I know what can’t pass,” Feinstein said last week.

It’s a hard play to combat, but with so much attention on Feinstein, activists had a slight advantage. Members of Climate Hawks Vote, a California-based political organization that focuses on climate, fired off nearly 2,000 letters to Feinstein within 48 hours of the exchange, while other activists, from organizations such as Sierra Club and Indivisible, put pressure on Feinstein, asking her not to introduce her own resolution.

“Senator Feinstein’s draft resolution didn’t respect the science,” RL Miller, co-founder of Climate Hawks Vote, said in a statement. “It ignored politically popular aspects of the Green New Deal such as a jobs program. It ignored the need to keep California’s oil in the ground — and it’s inexcusable that California’s senior senator writes a resolution ignoring Trump’s threat to drill for oil off the California coast.”

Instead of an alternative resolution that has less ambitious goals, Senate Democratic leaders, along with Sen. Tom Carper, D-Del., the chair of the Environment and Public Works Committee, crafted a simple resolution that simply says that climate change is real, driven by humans, and needs to be dealt with by Congress. The entire Democratic Caucus, including Feinstein, is expected to sign onto the resolution. It’s not an ambitious plan like the Green New Deal, but it is superior to the California senator’s proposal, which laid out specific goals that, even if met, would not match the scale of the crisis.

They go on report that the Sunrise Movement has visited major Republican and Democratic politicians in their effort to pressure them. The strategy of children confronting politicians has even had an effect on Republicans, forcing Republican senate leader Mitch McConnell to change course as he realized that the GND is popular and forcing his caucus to vote against it would be disastrous for those who are facing tough races.

Defenders of Feinstein’s behavior say that the full video showed her in a much better light. I saw the full video and it does not change my impression of her being condescending. As for those who focus on Feinstein’s offering an internship to one of the students Isha Clarke as a defense of her behavior, Clarke herself is impatient with that argument.

Although Clarke was offered an internship in Feinstein’s office at the conclusion of the Friday meeting, she says that the offer is a distraction from the real issue.

“A lot of people have used [the internship offer] to, like, change the whole encounter, you know?” Clarke said. “We had this whole super-heated, powerful exchange, and then people were saying, ‘but it ended like on a happy note, one of the kids even got an internship!’ That’s defeating the whole purpose of why we were there.”

A surprising little nugget at the end of the Chavez and Grim report is that Feinstein was taken unawares by her notoriety after the meeting.

As the protests persist, the lawmakers should be prepared for more of those interactions to go viral, unlike Feinstein, who was caught by surprise. “You know what somebody said to me? – I didn’t see any of this – they said anybody with a cell phone in their hand can get you on international news in two minutes,” Feinstein told an Intercept reporter, tapping her finger on his phone. “I never knew that.”

In this day and age, how could Feinstein possibly be this unaware of the ubiquity and power of smart phone videos? She should, as cartoonist Matt Bors points out, remind herself of a basic rule of politics: Be nice to children. 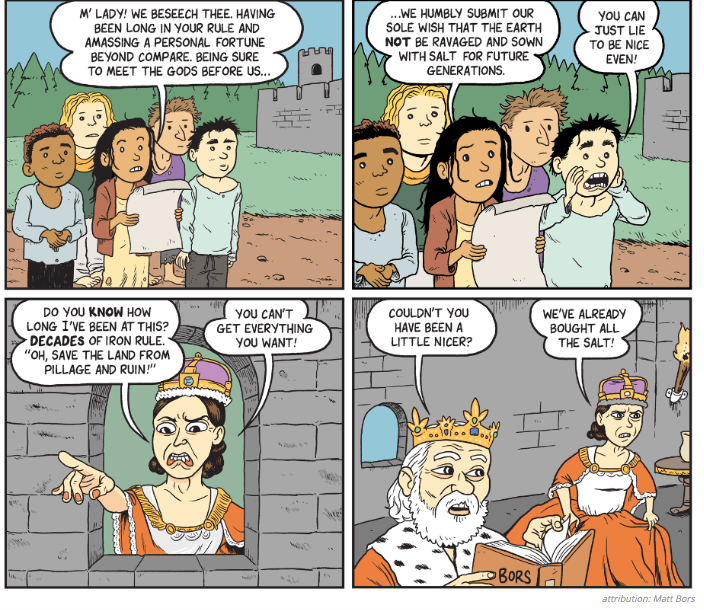 Meanwhile, Australia has just broken the record for the hottest summer ever, beating the previous record by a whopping 1C and above the long-term average by 2.14C.