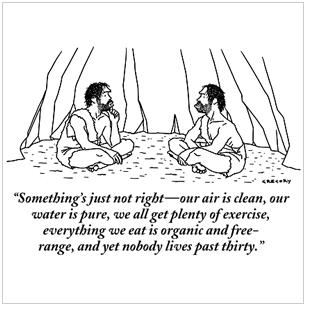 This cartoon is dependent on the idea that early humans died at a very young age compared to now. But Christine Cave says that this is a myth and that people lived to quite old ages.

So it seems that humans evolved with a characteristic lifespan. Mortality rates in traditional populations are high during infancy, before decreasing sharply to remain constant till about 40 years, then mortality rises to peak at about 70. Most individuals remain healthy and vigorous right through their 60s or beyond, until senescence sets in, which is the physical decline where if one cause fails to kill, another will soon strike the mortal blow.

The origins of the myth lie in some systematic biases introduced in the way we estimate average lifetimes. One factor that she mentions that is fairly well known is that average lifetimes at time of birth can be low because of high infant mortality rates. If we instead calculate average lifetime after people reach adulthood, the value can rise significantly.

These differences will accumulate as the years increase, meaning that once a person reaches the age of about 40 or 50, the differences are too great to allow any one-size-fits-all accuracy in the determination of the calendar age, whether it is done by eye on a living person or by the peer-preferred method of skeletal ageing. The result of this is that those older than middle age are frequently given an open-ended age estimation, like 40+ or 50+ years, meaning that they could be anywhere between forty and a hundred and four, or thereabouts.
…

Archaeologists’ age estimates, therefore, have been squeezed at both ends of the age spectrum, with the result that individuals who have lived their full lifespan are rendered ‘invisible’.

She and her colleagues are trying to find ways to more accurate measure the ages of death of fossils by measuring the wear and tear on teeth and were able to estimate “how many people lived to a grand old age, but also which ones were 75 years or older, and which were a few years past 50.”