I got into a discussion recently with a wealthy Republican supporter about the tax bill. He was arguing that it would benefit everyone by pointing to Republican talking points that focus on the average value of the tax cuts. I tried to tell him that when a distribution is not roughly symmetric about the average value (also called the mean) but is skewed, then the average value is not an accurate reflection of the situation. Since he is a physician, I was surprised to discover that he did not seem to know the difference between the mean and the median.

I had to give him an example. If five people get tax cuts of $100, $10, $5, $3, and $2, then the average tax cut, which is obtained by dividing the total amount of $120 by the total number of people (which is five) is $24. But one person gets much more than the average and four get less, with three getting a lot less. But the median (the value about which half the population gets more and half less) is $5, and this more closely reflects the realities of the situation than the mean. That is why I reject all assertions about the average value of the tax cuts as meaningless because so much of it goes to a tiny fraction at the top that the distribution is highly skewed.

What is also clear is that any tax cuts for the lower income groups are front loaded to take place in the first few years and taxes will actually increase for them in later years. This chart below shows how taxes will change for a family of four making the median income of $59,000 over time. 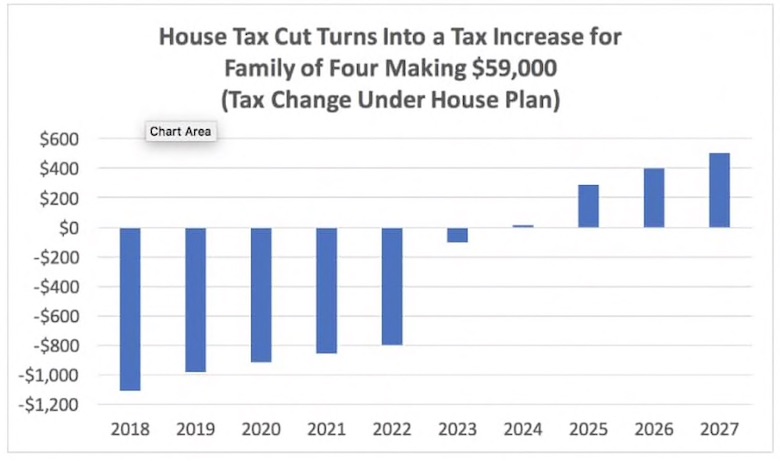 Naturally, Republicans are only talking about the first year cuts. And do not want to answer questions about the later years.

When The Washington Post asked Ryan’s office about this, they deferred to the House Ways and Means Committee. A spokeswoman there sent over the breakdown for how the $59,000 family gets a tax cut in the first year, but not what happens in the following years.

Meanwhile the tax cuts for the wealthy keep growing over the years. And that is not even taking into consideration that tax accountants will be busily finding new ways to exploit all the last-minute loopholes inserted into the bill that will benefit their rich clients even more. Kevin Drum also provides a chart that shows which income range get what changes in taxes in 2019 and in 2027. That the skewed distribution in favor of the wealthy gets more skewed with time is clearly seen.

What about all the new jobs that these tax cuts to the wealthy will reported create? Here is a cartoon by Matt Bors that describes what the taxes will really do 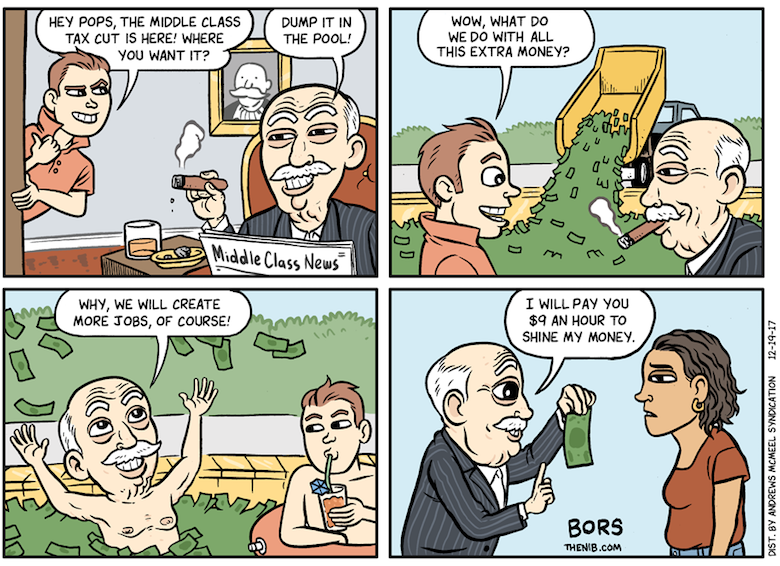 Much of the world views Donald Trump as a paper tiger » « I too am a sick, weird, freak