In his 1995 book Darwin’s Dangerous Idea, Daniel C. Dennett invoked a metaphor that I have found quite helpful. He said that the idea of evolution by natural selection is like a ‘universal acid’, something that cannot be contained in any vessel because it eats through everything. It is so potent and corrosive that once created it cannot be contained or restricted in any way but breaks through all barriers until it reaches into every space. Once you accept the theory of evolution by natural selection as applying in any area of life, there is no way to prevent it being used to explain every aspect of life.

People have attempted to limit the spread of this completely naturalistic explanation’s applications, suggesting for example that it might apply to all systems except human beings who were created by their god. But it turns out to be tough to draw the line between humans and other living things and the acid broke through. They then attempted to hold the line at morality but the acid broke through again. The last frontier is that of consciousness in general, that there is something about our sense of self-awareness and free will that transcends the workings of the material brain. But that too is a hard sell. Once you accept that humans are the product of evolution, why should the brain and all its activities not be part of that process?

It turns out that religious people also find Darwinian evolution a big stumbling block. I found a report on the results of a survey conducted by the Discovery Institute, the headquarters of the intelligent design movement, that pretty much confirmed the idea of evolution being a universal acid. It is titled Darwin’s Corrosive Idea by John West and you can download a pdf of the full report here.

The report explains why the survey was done.

In order to gain insights into the impact of specific scientific ideas on popular beliefs about God and ethics, Discovery Institute conducted a nationwide survey of a representative sample of 3,664 American adults. The survey asked questions about various scientific ideas and their impact on a person’s personal beliefs about God, human uniqueness, and ethics. Because one of the main survey goals was to ascertain the impact of evolutionary ideas on those who have lost their religious faith, the survey sample included 1,146 self-identified atheists and agnostics. Key findings of the survey include:

Here are graphs of their main findings. 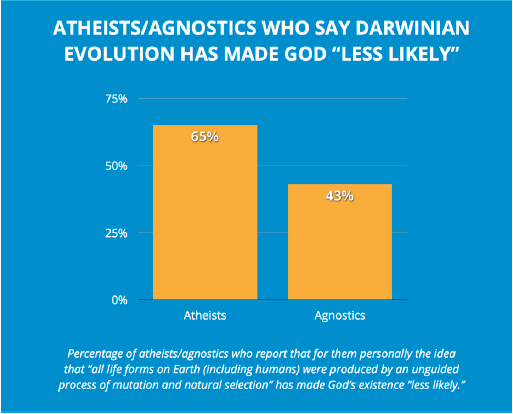 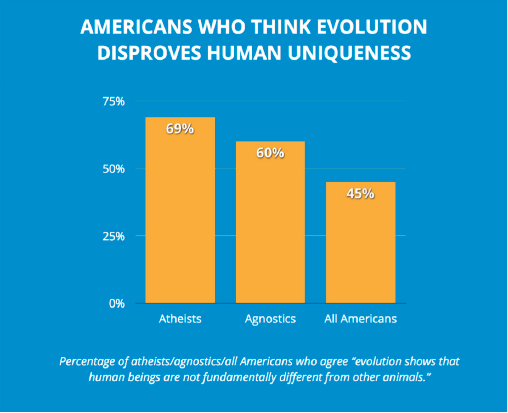 The survey also finds that evolution undermines belief in the uniqueness of human beings among all species.

A majority of Americans (55%) now believe that “evolution shows that moral beliefs evolve over time based on their survival value in various times and places.” About 7 in 10 (71%) of self-described atheists embrace this idea, as do 68% of self-described agnostics, 58% of 18-29 year-olds and those over 60, 58% of those who live in the Mid-Atlantic region, and 57% of those who live in the Pacific region.

As the report concludes:

On the other side, the survey finds that theists and agnostics say that the things that make them more likely to believe in a god is the complexity of life and the fine-tuning of the universe, the ideas that the ID movement pushes.

Many people who have not been closely following the nuances within creationism may think that the intelligent design believers, since they are not Young Earth Creationists, are just one branch of those who call themselves ‘theistic evolutionists’, that tries to preserve a role for god while accepting evolution. But actually they are antagonistic factions, with the ID people seeing theistic evolutionists as wimpy appeasers of evolution. David Klinghoffer, one of the chief advocates still pushing intelligent design at the Discovery Institute, wrote an article about one biologist Stephen Matheson as an example of the danger posed by those who called themselves ‘theistic evolutionists’.

Formerly a professor at an Evangelical Christian school, Calvin College, Matheson is still listed as a Blog Author at the theistic evolutionary website BioLogos, where it notes that he enjoys “explor[ing] issues of science and Christian faith.”

Well, his theistic evolutionary explorations have now terminated. As he reports on his personal blog page, where he took a hiatus of more than five years along with a break from his teaching, he is “happily” no longer a Christian.
…

We know other cases of theistic evolutionists whose journeys veered from their own faiths.
…

[T]heistic evolutionists with any sensitivity must be aware of the corrosive nature of the idea they champion. Some will say that the strange posture of theistic evolution has to do with the recognition that, for many individuals, it serves as a resting place on the way from faith to loss of faith. It appears to have been that, in any event, for Steve Matheson.

Williams Jennings Bryan, the famous protagonist in the Scopes Monkey Trial, warned that this would happen. He said back then, “If Darwinism could make an agnostic of Darwin, what is its effect likely to be upon students to whom Darwinism is taught at the very age when they are throwing off parental authority and becoming independent? Darwin’s guess gives the student an excuse for rejecting the authority of God, an excuse that appeals to him more strongly at this age than at any other stage in life.” He also saw evolution as a slippery slope, saying “Evolution naturally leads to agnosticism and, if continued, finally to atheism.”

Although he was portrayed as a bit of a buffoon in the film Inherit the Wind, Bryan was no fool.