The work of the research team of Anne Case and Angus Denton that documented the rise in the number of deaths of middle-class white people first came to attention in 2015 with their paper that said in its abstract:

This paper documents a marked increase in the all-cause mortality of middle-aged white non-Hispanic men and women in the United States between 1999 and 2013. This change reversed decades of progress in mortality and was unique to the United States; no other rich country saw a similar turnaround. The midlife mortality reversal was confined to white non-Hispanics; black non-Hispanics and Hispanics at midlife, and those aged 65 and above in every racial and ethnic group, continued to see mortality rates fall. This increase for whites was largely accounted for by increasing death rates from drug and alcohol poisonings, suicide, and chronic liver diseases and cirrhosis. Although all education groups saw increases in mortality from suicide and poisonings, and an overall increase in external cause mortality, those with less education saw the most marked increases. Rising midlife mortality rates of white non-Hispanics were paralleled by increases in midlife morbidity. Self-reported declines in health, mental health, and ability to conduct activities of daily living, and increases in chronic pain and inability to work, as well as clinically measured deteriorations in liver function, all point to growing distress in this population. We comment on potential economic causes and consequences of this deterioration.

In the body of their paper, they compare white, non-Hispanic rates with black and Hispanic mortality rates in the US and those of six other rich industrialized nations (France, Germany, UK, Canada, Australia, and Sweden). (USH refers to US Hispanics.)

A more recent report by the same team looks at the possible causes for this rise.

We build on and extend the findings in Case and Deaton (2015a) on increases in mortality and morbidity among white non-Hispanic Americans in midlife since the turn of the century. Increases in all-cause mortality continued unabated to 2015, with additional increases in drug overdoses, suicides, and alcoholic-related liver mortality, particularly among those with a high-school degree or less. The decline in mortality from heart disease has slowed and, most recently, stopped, and this combined with the three other causes is responsible for the increase in all-cause mortality. Not only are educational differences in mortality among whites increasing, but mortality is rising for those without, and falling for those with, a college degree.
…

We propose a preliminary but plausible story in which cumulative disadvantage over life, in the labor market, in marriage and child outcomes, and in health, is triggered by progressively worsening labor market opportunities at the time of entry for whites with low levels of education. This account, which fits much of the data, has the profoundly negative implication that policies, even ones that successfully improve earnings and jobs, or redistribute income, will take many years to reverse the mortality and morbidity increase, and that those in midlife now are likely to do much worse in old age than those currently older than 65.

They also looked at gender disparities and found that white women seemed to have a larger increase in mortality rates that white men.

This sense of deep despair among white people may be one contributing factor as to why this group was so willing, eager even, to buy Donald Trump’s absurd and grandiose and totally unrealistic promises that he would solve all their problems with a wave of his great deal-making hand, when they must have known deep down that those promises could not be realized. It was escapist fantasy, grasping at the most slender of hopes that he could perform a miracle. This is why they will not give up on him easily, since that would mean giving up hope.

There might be a tendency to dismiss this phenomenon as simply another example of privileged white people whining when they suffer some hurt that others have experienced in much greater magnitudes over a much longer time. But as we have seen previously with the drug problem, it is usually when a problem starts affecting white people, especially those who are not poor, that policy makers start treating it as a serious problem to be addressed economically, medically, and sociologically instead of blaming it on moral lapses or poor choices by the poor and people of color affected by it that require punitive measures.

It should be emphasized that mortality rates for blacks and Hispanics remain higher than for whites. What is being noted is that those rates have declined quite rapidly over time while the decline for non-Hispanic whites has ceased and started to rise. The authors do not go into why blacks and Hispanics are not seeing similar rises. It may be that since those declines in mortality are similar to what is observed in other countries, it is the white middle-class numbers that are anomalous that require explanation.

Doonesbury suggests a possible reason, though. 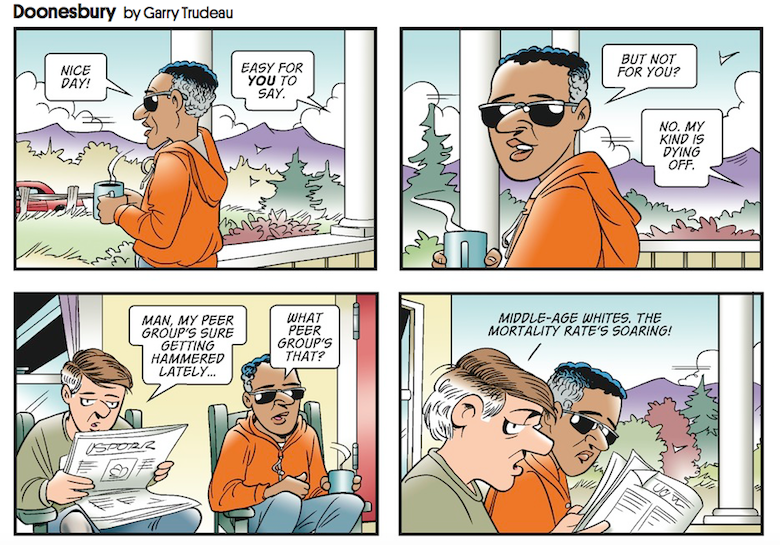 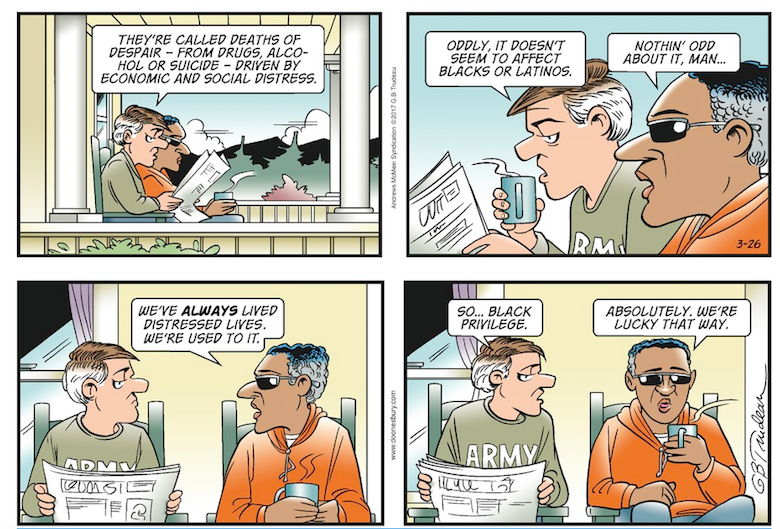 Tyrants, dictators, and demagogues » « Delusions of grandeur by world leaders