The revolutionary leader of Cuba has died at the ripe old age of 90, after surviving numerous attempts by successive US governments to murder him. He said on his 80th birthday that, “I’m really happy to reach 80. I never expected it, not least having a neighbour, the greatest power in the world, trying to kill me every day.” He had proven so resilient that he seemed almost immortal and so his death, even though he had been having health issues for some time, comes as a shock.

Cuba has declared nine days of national mourning to mark the death of Fidel Castro, whose demise at the age of 90 has prompted emotional scenes in Havana and Miami, tributes and reflections from world leaders, and ushered the island into an uncertain era.
…

Given the former president’s age and health problems, the announcement of his death had long been expected. But when it came it was still a shock: the comandante – a figurehead for armed struggle across the developing world – was no more. It was news that friends and foes had long dreaded and yearned for respectively.

In addition to trying to murder him and destabilize the country by fomenting unrest, the US also imposed a harsh regime of economic sanctions aimed to destroying the Cuban economy and bring down his government and destroying the social welfare system that, despite the resulting economic hardship, provided free education that led to high levels of literacy, and free medical care to the people.

Latin America’s leftwing leaders mourned the passing of a figure who was perceived less as a communist and more as a nationalist symbol of regional pride and defiance against the “gringo” superpower.

Evo Morales, the president of Bolivia and a close ally of the late Cuban leader, said he was deeply saddened at Castro’s death. “Fidel [was] the only man in the world with so many principles and so many values,” he told the Latin American television network Telesur. “He made so much history not only for Cuba, but also for the planet. That is socialism.”

He added: “There will never again be a man or comrade like Fidel, who devoted his life, his knowledge and his struggle not only to the Cuban people but to all the people of the world.”

Castro and Cuba were sources of inspiration to revolutionary movements all over the developing world and aided many of them in overthrowing the colonial overlords that had kept them under brutal suppression. Most notably, he championed Nelson Mandela and the fight against apartheid at a time when the US, the UK, and the west were supporting that appalling racist system. Mandela never forgot it and repeatedly expressed his gratitude. 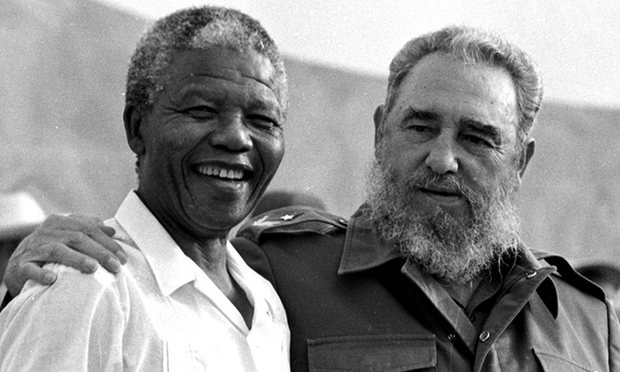 Tributes from other world leaders have poured in and Reuters has compiled a list of memorable quotes by Fidel, showing his defiance and impish sense of humor.

Fidel was a giant on the international stage, towering over all the US presidents who tried to kill him, overthrow him, or otherwise destroy his efforts to improve the lot of the Cuban people. Long after those presidents are forgotten, the name of Fidel will live on in the world.