The ghastly story of what happened in Flint, MI should strike fear into the entire nation because it is not just a local story affecting one impoverished town. For those unfamiliar with the case, the people of that city have been found to have dangerously high levels of lead in their blood due to the contamination of their drinking water. This has been going on for two years. As a result, the residents of that city have been forced to purchase bottled water until the mess is cleared up and president Obama has issued an emergency declaration, enabling federal government resources to be used to address the emergency.

This article describes the scale of the problem. Note that there is really no safe level of lead in water but that the EPA recommends that if levels rise above 15 ppb (parts per billion) then action should be taken to reduce it. But even levels as low as 5 ppb have been cause for concern.

In the spring of 2015, city officials tested water in the home of LeeAnne Walters, a stay-at-home mother of four and a Navy wife. They got a reading of 397 ppb, an alarmingly high number.

But it was even worse than that. Virginia Tech’s team went to Walters’ house to verify those numbers later in the year. They were concerned that the city tested water in a way that was almost guaranteed to minimize lead readings: They flushed the water for several minutes before taking a sample, which often washes away a percentage of lead contaminants. They also made residents collect water at a very low flow rate, which they knew also tended to be associated with lower readings.

So the Virginia Tech researchers took 30 different readings at various flow levels. What they found shocked them: The lowest reading they obtained was around 200 ppb, already ridiculously high. But more than half of the readings came in at more than 1,000 ppb. Some came in above 5,000 — the level at which EPA considers the water to be “toxic waste.”

The highest reading registered at 13,000 ppb.

As we all know, lead is highly harmful to the brain, and children especially can suffer long term damage when they have high levels of it that lead to violent behavior as adults. There have been studies that suggest that high levels of lead correlate with high levels of violent crime.

While the crisis is devastating for Flint, the way that it came about should alarm everyone. It was because in order to save a little money, the city switched the source of its water from Lake Huron to the Flint river but adequate tests were not done to ensure that the water quality was satisfactory. But the river water is highly corrosive due to extensive pollution and this led to the leaching of lead into the water from the pipes. And now it will cost an estimated $1.5 billion to clean up the pipes so that water from a clean source can be sent through it, a classic case of being penny wise and pound foolish.

This is what will happen all over the nation with increasing frequency. Thanks to the relentless Republican drumbeat that taxes and government are the enemy, we have seen the federal government and states cut all manner of taxes especially for the rich, including estate taxes that only the wealthy pay. This has resulted in the reduction of money that is sent to local communities that pays for schools, police, fire, infrastructure, and other general needs. Those cities are now squeezed for funds to run the most basic services and are cutting corners wherever they can. The resultant decay is everywhere visible except in the most affluent areas. Since Flint is a poor community, naturally Michigan’s governor Rick Snyder ignored the warning signs and is now the target of numerous lawsuits. I would like to see the people responsible for this disaster charged with criminal negligence.

And as in Flint, the bill for this cutting will come due in the future and it will be huge because fixing a broken system costs more than maintaining it.

Michael Moore, whose documentary Roger and Me highlighted how Flint, once one of the most prosperous in the nation, was devastated by the decision of General Motors to shut down its plant there and move it overseas, makes the point that the people of Flint were treated shamefully because they are poor and hence powerless.

Bernie Sanders has called for Snyder to resign.

“The governor long ago knew about the lead in Flint’s water,” the Vermont senator said in a statement issued by his campaign. “He did nothing. As a result, hundreds of children were poisoned. Thousands may have been exposed to potential brain damage from lead. Gov[ernor] Snyder should resign.”

In April 2014, as a cost-saving measure, the city of Flint switched its main water source from Lake Huron to the Flint river. Despite reports of problems with the water from sources including General Motors, which stopped using it, residents were advised by state officials to “relax” and continue to drink it.

In his statement on Saturday, Sanders said: “Because of the conduct by Gov[ernor] Snyder’s administration and his refusal to take responsibility, families will suffer from lead poisoning for the rest of their lives.

“Children in Flint will be plagued with brain damage and other health problems. The people of Flint deserve more than an apology.”

Tom Tomorrow provides the chronology of what happened and the shameful attitude of Flint and other officials. 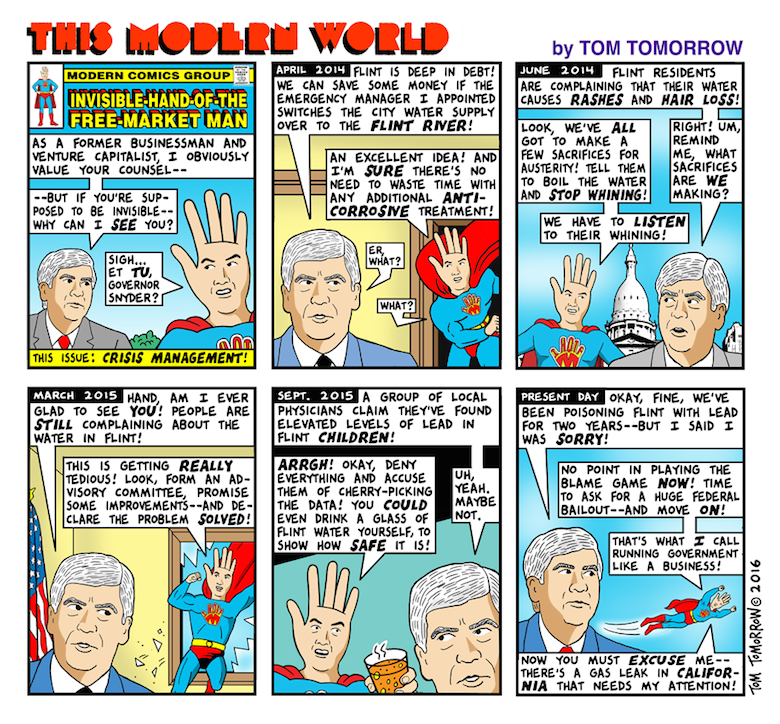 When local governments are faced with declines in revenues due to tax cuts that benefit the wealthy, they will cut funding to schools, police and fire departments, and other health and safety measures. What we see in Flint is what we will see all over the country until these tax cuts are rolled back. It is already happening. In the end, only those who live in gated communities, send their children to private schools, and can afford expensive home filtering systems will be able to do the things that we consider normal, like drinking tap water.

The Daily Show reports on the crisis

(This clip aired on January 12, 2016. To get suggestions on how to view clips of The Daily Show and The Nightly Show outside the US, please see this earlier post. If the videos autoplay, please see here for a diagnosis and possible solutions.)

A new planet in our solar system? » « It’s official: 2015 was the warmest year in modern times