During the Rose Bowl football game, multiple planes flew over the stadium and wrote the sentences ” AMERICA IS GREAT, TRUMP IS DISGUSTING” and “ANYBODY BUT TRUMP” in the sky. They also spelled out the tagline for an anti-Trump website ANYBODYBUTTRUMP.US. It was quite an impressive feat of skywriting, so neatly was it done. 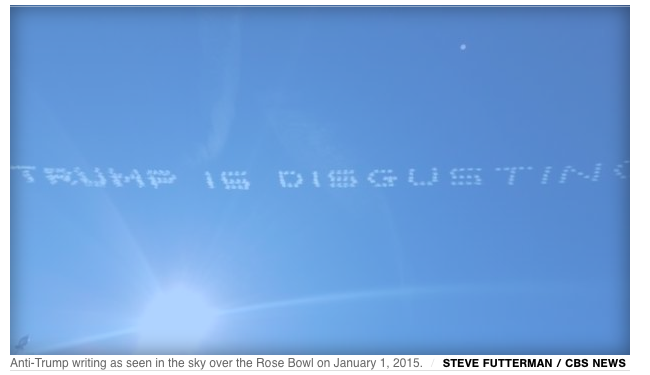 Who was the person behind this and other planes flying banners carrying similar messages at other bowl games? It turns out to be Stan Pate a millionaire real estate developer from Alabama who is a donor to the campaign of Marco Rubio.

Pate says that his antipathy towards Donald Trump is so great that he would vote for Hillary Clinton if the presidential contest ended up being between her and Trump.

Pate is not the first wealthy backer of Marco Rubio who has said that he would defect to Clinton if Trump were to be the Republican nominee. Knowing Trump’s proclivity to lash out at those who criticize him, expect Trump at some point to launch a blistering counter-attack and question Rubio’s loyalty to the Republican party.